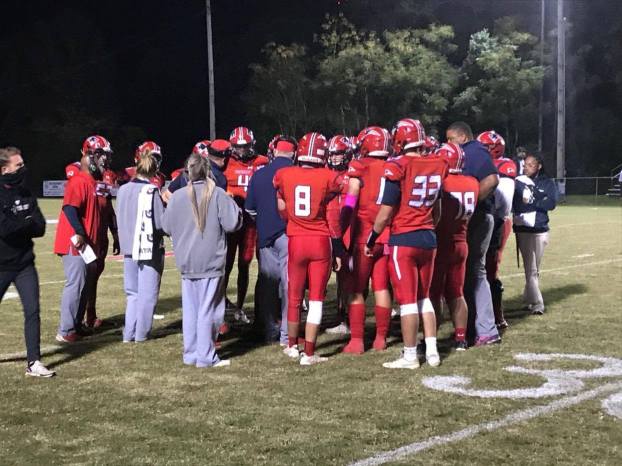 PLAS quarterback Mayes White completed 18 of 27 passes (66%) totaling 208 yards with one touchdown. He was also credited as the leading rusher for the Patriots, with 11 runs for 130 yards and had two touchdowns.

The leading receiver for the Patriots was Jay Taylor, who had nine catches for 120 yards with one touchdown.

Kameron Baker and K.C. Bradford also scored one touchdown each.

The defense had a big night, with six players having five or more tackles and they also forced four turnovers including three interceptions.

Derius Northcutt and Peyton Dicks both had eight tackles, Jackson Senn and Marx Copeland had seven tackles, and Levi Sikes and Kameron Baker had five tackles.

Scott Taylor Renfroe made 5 of his 6 PAT attempts.

Head Coach Mario White was proud of the way his players showed up when they needed to after injuries struck the team.

“We had a few guys out, so it was a night for a lot of people to step up,” said White.

Coach White credited four players with really helping the team to their win.

“Mayes [White], we’ve been together a long time, so he knows what I expect, and I know what he expects,” said White. “Jay Taylor has been amazing since he’s been here. He leads the way in practice every day.”

“K.C. Bradford…really stepped up for us tonight and played really physical, it showed tonight,” said White. “Kameron Baker has…hit his stride both offensively and defensively, and I really believe that he is a difference maker for our team.”

White was also concerned with the number of penalties and turnovers his team faced during the game, especially with an important game next week.

“We’ve got to clean up all the penalties, and we’ve got to protect the football,” said White. “The number-one team in Alabama is coming here next week and you’ve go to play sound football. we’ve got a lot of work to do.”