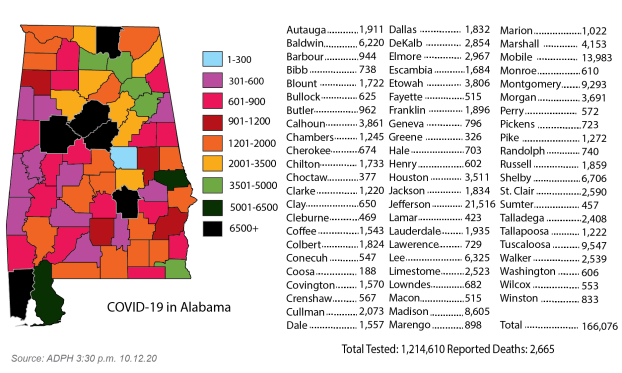 Pike County Schools has quarantined seven students and two employees for suspected COVID-19 cases, according to the district’s Monday update.

Dr. Mark Bazzell, superintendent, said the county continues to see improved numbers week-to-week. “The most cases we’ve had at one time was 13, with one-third of those being employees,” he said. “(These numbers) are much better than early September and have improved from week to week.”

The seven students quarantined include six at Banks and one at Goshen High School. The two employee cases include one in Banks and one other, who has confirmed positive.

In addition to the Pike County Schools cases, Troy University reported seven new cases among students on Monday as well as two among employees. Nearly 470 students on the Troy campus have tested positive since Aug. 3, along with 20 employees.

Pike County added four confirmed cases and one probable case on Monday, according to the Alabama Department of Public Health.

Those cases bring the total confirmed and probable to 974 and 298 respectively, for a combined 1,272 since tracking began in March, with 12 deaths.

The county shifted to the low risk category on Friday.