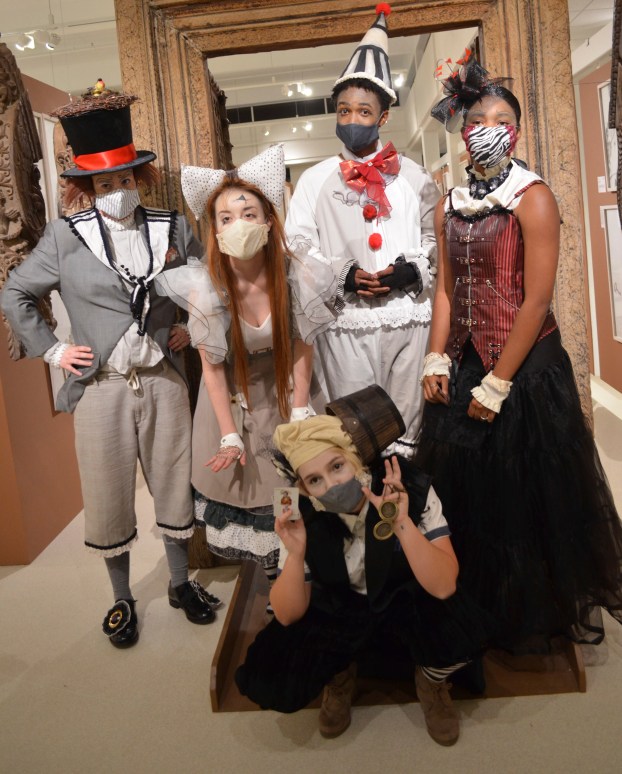 Artists takes viewers back to Wonderland in new exhibit

“The ‘Alice in Wonderland’ series is unique in Nall’s career, and it stands as his most acclaimed work,” said Carrie Jaxon, IAC director. “We are honored to host this exhibit, which illustrates the brilliance of an artist coming into his own. “

“But it’s not that kind of Alice,” said Kaitlyn Callaway, Nall’s assistant at Fairhope.

No, Callaway said, Nall’s “Alice in Wonderland” is an emotional work of art that is an expression of Nall’s love for “Alice” and, also a remarkable pencil work that captures both Nall’s artistic genius and his whimsical, sometimes, goof-off nature.

Nall was the center of attention at the gala event, but he continually directed the attention from himself to “Alice.”

For Nall, his desire to express his living and loving of “Alice” was an emotional journey and also a “somewhat spiritual journey.” He realized that his picture story of Alice in Wonderland could best be told in pencil but not just a pencil drawing. It had to be a pencil painting and that dictated his developing and perfecting a pencil painting technique.

“How, do you draw a white string on white piece of paper with a pencil?” Nall said, with a questioning, raised eyebrow.” Then he quickly directed his attention to the gallery guests “Do come see ‘Alice.’”

“Nall is deliberate in taunting the viewer with eye candy,” Noriega said. “Look closer and you begin to see the truth, the reality of the Wonderland we live in and the passages we experience.”

Al Head, former longtime executive director of the Alabama State Council on the Arts, said there can be no doubt that “Alice” is the creation of a master artist at his best. “

“Nall’s Alice in Wonderland’ is an extremely sophisticated work of art, a very special body of work,” Head said. “It is an amazing ‘drawing.’ It is Nall.”

Troy University Chancellor Dr. Jack Hawkins, Jr. likened Nall to a destructive insect that invaded Coffee County around 1917. The pest destroyed the county’s cotton crop and caused economic devastation. Two years later, the City of Enterprise erected a monument to the destructive boll weevil that made the peanut king and brought prosperity to their land.

“Nall has been a disrupting force in the arts,” Hawkins said. “Nall has redirected the arts and his relationships with artists have strengthened the partnership between the arts in the East and the West around the globe and at Troy University.”

The chancellor, laughingly, said his “bride’ and Troy University First Lady Janice Hawkins is a disruptive force in his life.

“When Janice learned that a parking was being planned for this space, she said, ‘Over your dead body.’”

The First Lady’s vision, not for just an art center at Troy University, but for an international art center, took time, planning and bringing others on board who shared her vision.

Fred “Nall” Hollis, a hometown boy, was on board from the very beginning.

Hurricane Sally dumped more water on Pike County on September 16, than most roadways could handle and several bridges could... read more