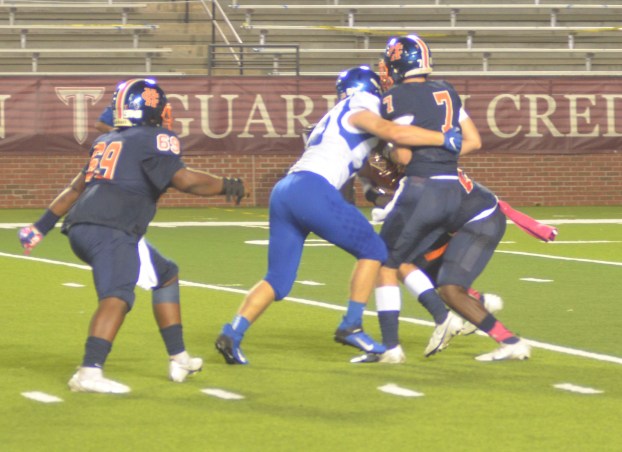 The Rehobeth Rebels improved to 4-4 on the season with a 29-14 win over Charles Henderson High Thursday night in Troy’s Veterans Memorial Stadium, as the Trojans slipped to 0-6.

Rehobeth scored the first touchdown of the game when senior Peyton Stephens completed a 7-yard pass to another senior, William Keasler, and the extra point by placekicker Avery Vickers was good for a 7-0 lead with 2:43 remaining in the first quarter.

The Trojans got as close as the Rehobeth 31 with 7:39 showing in the second quarter, but could advance no further.

CHHS sophomore linebacker Damien Hart later stripped the ball and returned it 26 yards to the Rehobeth 36, but the drive stalled at the Rebel 34.

Brandon Austin, a junior running back, punched it in from 1 yard out to put the Rebels ahead 13-0. The try for two was no good, and it was 13-0 Rehobeth with 2:41 left in the second quarter. The score was set up when senior running back Mason Rivers busted a 53 yard jaunt to the CHHS 3.

Rehobeth extended its lead to 20-0 on a 33-yard TD run by Zack Henderson with 8:49 showing in the third quarter, as Vickers added the PAT.

CHHS was backed up to its own 12 yard line in the third period, when Rebel defender Will Jordan sacked the Trojan quarterback in the end zone for a safety, and it was 22-0 with 4:28 remaining in the third.

Following the safety CHHS kicked off to the Rebels, and Zaveion Helms returned the ball 65 yards for a touchdown and a 29-0 lead following the extra point with 4:10 remaining in the third quarter.

With 1:12 to go in the third period, Jywon Boyd, a freshman quarterback for CHHS, completed an 18-yard pass to Javen Hill for the Trojans, the extra point was no good and it was 29-6.

The Trojans cut the lead to 29-14 with 3:16 left in the game when Boyd threw a 29-yard TD pass to Hill, and then the pair connected again for a two-point conversion pass play. That held up to be the final score at 29-14.

The Rebels improved to 2-3 in region play after the Class 5A, Region 2 contest, while CHHS stands at 0-4.

Rehobeth hosts Headland next Friday evening, Oct. 16, while CHHS is at Carroll of Ozark.

A cat in Opelika was diagnosed this week with the same coronavirus that causes COVID-19 in humans. The Alabama Department... read more