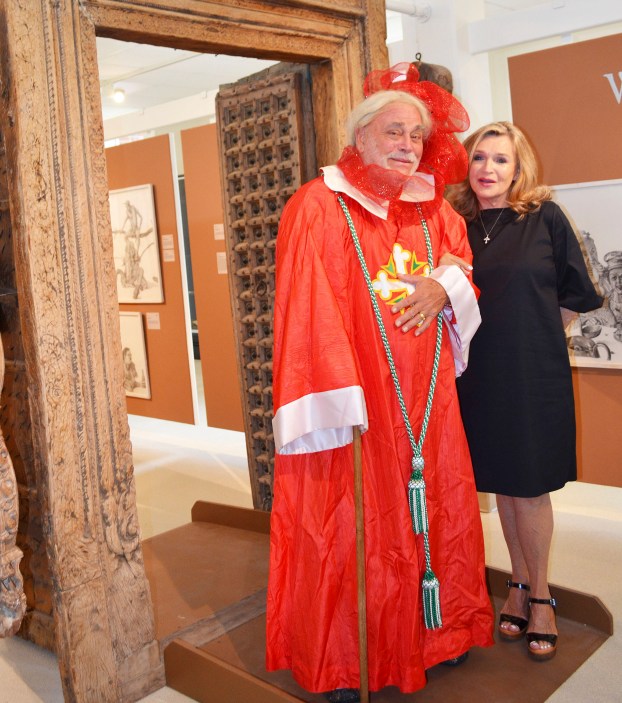 The artist Nall was joined by Janice Hawkins for a sneak peek of the Alice in Wonderland exhibit that opened Thursday at the International Arts Center on the Troy University campus.

The exhibition by internationally acclaimed artist Fred “Nall” Hollis is considered to be his most valuable and important series of art.

Troy University First Lady Janice Hawkins and Nall, a native Trojan, provided a sneak peek preview of the exhibit at 2 p.m. and those in attendance were enlightened by the artist’s comments and entertained by his “just being Nall.”

And, what does the artist think, “Alice in Wonderland” is?

Speaking “regally,” Nall said “Alice in Wonderland,” is all of these things and more.”

“‘Lewis Carroll’s ‘Alice in Wonderland’ holds a special place in my heart. For me, it was coming of age. It was falling into the rabbit hole of life.”

“Alice” took possession of a period of Nall’s adult life.

“I was fascinated by Lewis Carroll’s work, by the characters and I wanted to create those characters my way.”

Nall’s desire was to bring Carroll’s character into “being.”

“For three years, I traveled around the world, looking for models who would best fit the characters,’ he said.  “Alice, The Mad Hatter, Queen of Hearts, White Rabbit, Caterpillar and The Dormouse, all the characters.

“How do you find these models?  You just don’t stop until you do.”

Nall said when he traveled in search of his next model, he kept the sketches, the drawings, of his found models in his car.

He was attempting to cross a European border but was stopped and his vehicle was searched. When the border officer found the “odd-looking” sketches, he asked, “Is this what you are carrying across the border?”

When Nall said, that it was, he was told to “continue” to his destination.

For Fred “Nall” Hollis, “Alice in Wonderland” is a part of who he is. Creating “Alice” was an emotional journey.

“All emotion springs from your culture,” he said.

Nall expressed his appreciation to First Lady Janice Hawkins for her vision for the International Arts Center at Troy University and for the opportunity to bring his work home to Troy, Alabama, the place from which his emotion springs.

Hawkins said Nall’s gifts to the university’s permanent collection are substantial. Not only are his gifts treasures for Troy University and its students but for his hometown and all Alabama.