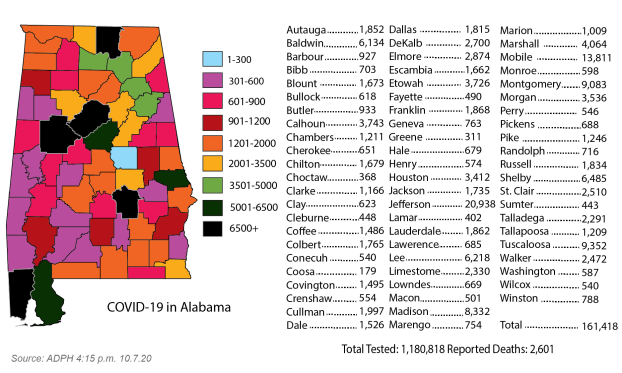 Rate of spread slows at university

More than 450 students on the Troy campus have tested positive for COVID-19 since Aug. 3, according to university reports.

Those students include more than 130 living on campus.

All told, more than 6.8 percent of the Troy student body has tested positive since students began returning in August.

Continuing concerns about the spread of COVID-19 prompted the cancellation of the Troy University Homecoming and Appreciation Day parade earlier this week by the Pike County Chamber of Commerce.

On-campus leaders said students will still participate in many of the traditional homecoming week activities, including a service project; blood drive; dance night; Chalking the Quad; and banner contests.

Crowning of a queen and court, along with honoring alumni, will take place off the field during the Oct. 24 game against Georgia St.

In addition to the university cases, the Alabama Department of Public Health has recorded a total of 1,246 cases in Pike County since early March, including 959 confirmed and 287 probable, as well as 12 deaths.

More than 67,945 people are presumed recovered.

Concerns over COVID-19 have led to the cancellation of the Troy University Homecoming and Appreciation Day Parade and ongoing adjustments... read more