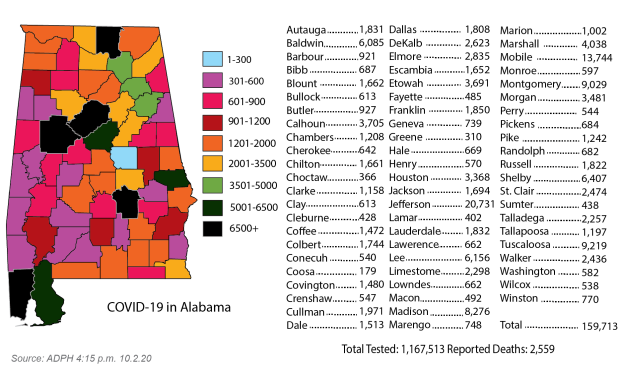 More than 1,240 cases of COVID-19 have been diagnosed in Pike County since tracking began.

The Alabama Department of Public Health on Monday reported 957 total confirmed and 285 probable cases, with 85 cases confirmed in the last 14 days.

The probable tests are those confirmed with antigen or rapid response tests.

More than 2,555 deaths have been attributed to COVID-19 since tracking began. More than 67,945 are presumed recovered.

Troy University reported an additional 19 cases among students on Monday, including 15 off campus and two on-campus in Troy. The others were students on the Montgomery and Dothan campuses.

The university has more than 440 students test positive in Troy since Aug. 3 and 18 members of the faculty and staff.

Every 11 minutes, one person in the United States dies from suicide. For those who are standing in line at... read more