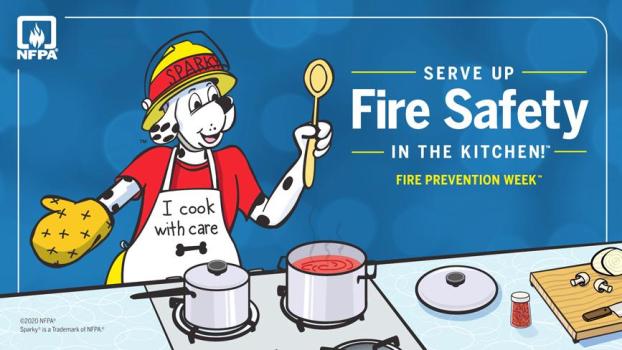 “Serve Up Fire Safety in the Kitchen!™

The Troy Fire Department is teaming up with the National Fire Protection Association — the official sponsor of Fire Prevention Week for more than 90 years —to promote this year’s Fire Prevention Week campaign, “Serve Up Fire Safety in the Kitchen!” The campaign works to educate everyone about  simple but important actions they can take to keep themselves and those around them safe.

National Fire Prevention Week is Oct. 4 and 10, and Troy Mayor Jason Reeves issued a proclamation this week in support of the week and its educational efforts.

Home fires killed more than 2,630 people in the United States in 2017, and fire departments throughout the national responded to more than 357,000 home fires in that same timeframe, the proclamation states.

According to NFPA, cooking is the leading cause of home fires and home fire injuries in the United States. Almost half (44%) of reported home fires started in the kitchen. Two-thirds (66%) of home cooking fires start with the ignition of food or other cooking materials.

“We know cooking fires can be prevented,” said Lorraine Carli, NFPA’s vice-president of outreach and advocacy. “Staying in the kitchen, using a timer, and avoiding distractions such as electronics or TV are steps everyone can take to keep families safe in their homes.”

“The most important step you should take before making a meal is to “Serve Up Fire Safety in the Kitchen!” said Fire Chief Michael Stephens. “A cooking fire can grow quickly. I have seen many homes damaged and people injured by fires that could easily have been prevented.”

The Troy Fire Department wants to share safety tips to keep you from having a cooking fire.

• Never leave cooking food unattended. Stay in the kitchen while you are frying, grilling or broiling. If you have to leave, even for a short time, turn off the stove.

• If you are simmering, baking, roasting, or boiling food, check it regularly, remain in the home while food is cooking, and use a timer to remind you that you’re cooking.

• You have to be alert when cooking. You won’t be alert if you are sleepy, have taken medicine or drugs, or consumed alcohol that makes you drowsy.

• Always keep an oven mitt and pan lid nearby when you’re cooking. If a small grease fire starts, slide the lid over the pan to smother the flame. Turn off the burner, and leave the pan covered until it is completely cool.

• Have a “kid-free zone” of at least 3 feet around the stove and areas where hot food or drink is prepared or carried.

Chelsea Singleton has a passion for the Trojan community. So when the opportunity arose to come back home and share... read more