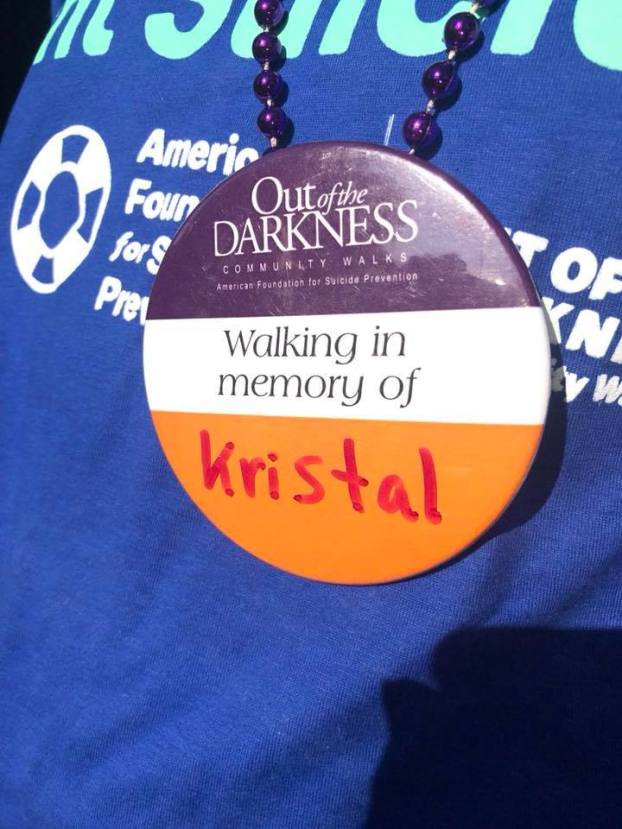 Every 11 minutes, one person in the United States dies from suicide.

For those who are standing in line at the grocery store, 11 minutes can seem like forever.

For those who are having fun with friends or for someone who is late for work, 11 minutes rush by.

But, for those who are struggling with thoughts of suicide, those 11 minutes can mean eternity.

Cassidy Oswald, formerly of Troy, lost a 17-year-old friend at Charles Henderson High School to suicide. She understands the pain of such a loss and also knows that suicide is often preventable.

Greater awareness of suicide and a great understanding of the cause of the number 10 killer of Americans could make a difference in the 11 minute statistics.

Cassidy has experienced the devastating loss that comes from the taking of one’s life. Suicide leaves behind questions and often regrets. And, it also creates a desire for such a tragedy to never happen again.

“Each year, the American Foundation for the Prevention of Suicide does this walk, this Out of Dark Walk,” Cassidy said. The walk is held to bring greater awareness to suicide and to raise money in support of the efforts to prevent suicide.

“However, this year, because of COVID-19, the Out of Darkness Walks will be held virtually. What that means is that those who want to participate will walk on their own. They will decide when they walk, where and how long. They can video their Out of the Darkness walks and share them on social media.”

Social media, she said, is a great place to bring awareness to suicide and the lives it claims.

Because suicide is personal for Cassidy she decided to do a virtual walk of her own.

“September is Suicide Awareness month and it was almost the end of the month,” Cassidy said. “I had been thinking about my own Out of Darkness Walk for a week or so but just hadn’t done it. Then, at work four days ago, I decided, ‘I’m going to do it.’ I decided to leave work and walk in an effort to help prevent suicide – to change those 11 minutes.’”

So, without any prior preparations, Cassidy, who lives in Lilburn, Georgia, got off work at 4 p.m. and started to walk to bring greater awareness to suicide.

“It was a last-minute decision but I decided to ‘do it today,’” she said. “And, because every 11 minutes, someone takes their life, I would walk 11 miles.”

Early in Cassidy’s Walk Out of Darkness, she was getting a lot of “honks” along the busy streets so she decided to stop at Walgreen’s and buy a tee shirt.

“I thought it would be good to let people know what I was doing instead of them thinking I was just a crazy person out walking along the streets,” she said.

Cassidy bought a Minnie Mouse T-shirt, turned it inside out and wrote in large, dark letters, “Walking for Suicide 11 Miles.”

Cassidy stayed within the vicinity where she lives and continued walking and walking. She began to realize that 11 miles is “11 miles.” She need some nourishment to keep her stamina in high gear so she stopped, “at Subway!”

For a time, car horns acknowledge her mission but soon the honking stopped and Cassidy was walking in near obscurity and time seemed to slow. The miles grew longer and the Walk Out of Darkness became a walk “in” darkness.

“I felt a little nervous walking in the dark so the last three miles I just circled (an area) hotel,” she said. “That was a lot of circling.”

When, Cassidy’s Walk Out of Darkness was completed, five hours later, at 9 p.m., her hope was that her video would raise greater awareness of suicide and the toll it takes on lives of different ages. Her hope was also that her walk might help raise funds for suicide prevention and, perhaps, encourage others to embark on their own virtual “walks.”

These virtual Walks Out of Darkness can be any distance and they can be made alone, with a few friends or with a large group. What is important is the awareness they bring to suicide, its causes and the knowledge that it can often be prevented.

“My hope, too, is that Walks of Out of Darkness will encourage more people to be comfortable talking about suicide,” Cassidy said. “One life is taken every 11 minutes. When standing in line or waiting for the workday to end, think that while you waited, someone was taking his or her life. Every 11 minutes, remember.”

Pike County shifted back into the moderate category for COVID-19 risk on Friday, according to the Alabama Department of Public... read more