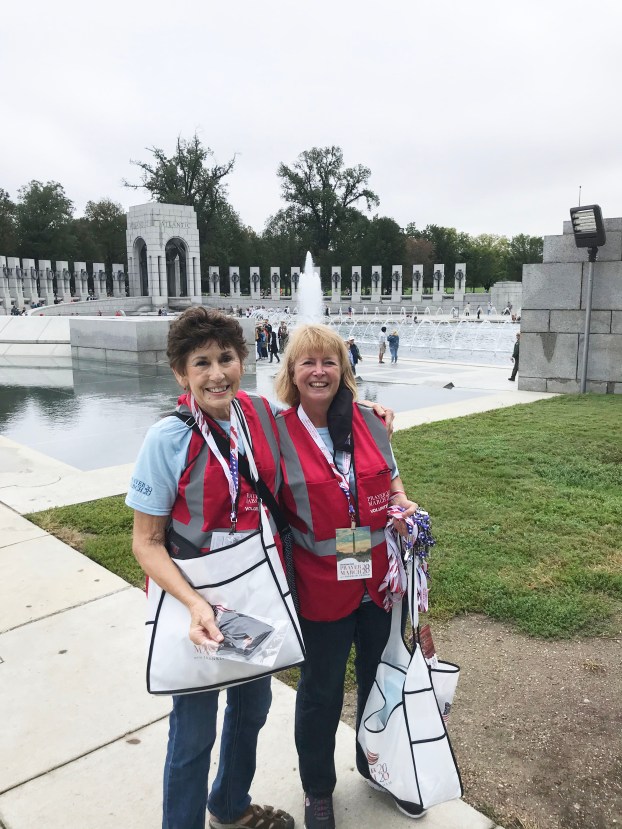 Tens of thousands participated in the 2020 Prayer March in Washington D.C. on Saturday that was led by Rev. Franklin Graham.

“Being there was overwhelming,” said Ginny Hamm of Troy. “People where in our nation’s capital from all across the United States. Everywhere I looked, people were coming to be a part of this rally for our Lord and they just kept coming. There was a strong presence of our nation’s veterans and there were people from all walks of life and of all ages. Some were on walkers; others were in wheelchairs. Most were wearing Prayer March 2020 masks and carrying American flags and Christian flags.”

Hamm said the estimated crowd was around 55,000 and there was so much traffic on the 2020 Prayer March website that it crashed.

Hamm and her sister-in-law, Paula Caudill of Mississippi, were volunteers with the 2020 Prayer March and assisted with the distribution of masks and other items supporting the march as well as giving directions and information. And, of course, to join in prayer for America and its people.

“We had opportunities to pray with others at the different stations along the 2020 Prayer March route and doing so was such a blessing,” Hamm said.

At each station, there were prayer prompts.

At the Washington Monument, participants in the 2020 Prayer March were asked to pray for “communities and families, an end to abortion and salvation of the lost,” Hamm said. “At the Lincoln Memorial, the focus was humbling ourselves, repentance, and the healing of our land.”

Hamm said prayer prompts were also for military police and law enforcement, leaders across the nation, religious freedom and churches, national reconciliation and the president, vice president and Congressional leaders.

“But prayers were not just being lifted along the 2020 Prayer March to the nation’s  Capitol,” Hamm said. “On Friday night, Jonathan Cahn’s ‘The Return’ opened on the National Mall and continued on Saturday when thousands participated in a day of prayer and repentance.” “The Return” featured nationally acclaimed speakers including Ben Carson, Dr. James Dobson, Pat Robertson and Pat Boone and too many more to name, Hamm said.

“There was preaching on bullhorns and prayer groups of two to 20 or more and, then, someone would begin singing, ‘This Little Light of Mine’ or some other meaningful song and a few others would join in and then more and more. There was such an amazing feeling of happiness, of joy and of hope throughout the entire weekend.”

Throughout the weekend there was such a spirit of hope and the assurance that God was hearing the many prayers that were being raised.

“And that He is going to heal our hearts and our country,” Hamm said. “The 2020 Prayer March was a spiritual celebration as all voiced praised of our Lord. In that mass of humanity, I believe there rose a sweet aroma that filled God’s heart with joy in his people.”

Alabama alcohol regulators voted Tuesday to lift restrictions on operating hours for bars and restaurants that were imposed in the... read more