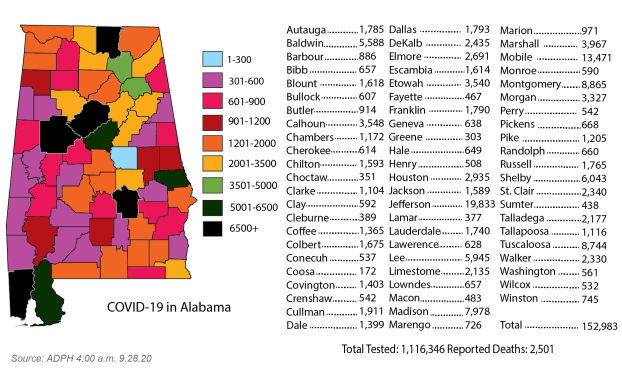 Changes in the way the Alabama Department of Public Health reports  coronavirus numbers resulted in a spike in overall cases.

In June, the ADPH began reporting probable cases as well as confirmed cases, keeping those totals separate. On Friday, the ADPH combined the totals in its graphs and the daily demographic updates.

In Pike County, total cases are now reported as 1,205, including 936 confirmed and 269 probable, with 10 deaths (eight confirmed, two probable). Ninety case have been reported in the last 14 days.

Troy University has reported a total of 394 cases among students at the Troy campus since Aug. 3.

Confirmed COVID-19 cases are people who have positive PCR tests, whether they are showing symptoms or not. Probable cases fall into two categories: people who have been exposed to a person with COVID-19 and have symptoms but have not been tested or people who have had rapid antigen tests.

“Confirmed and probable cases are investigated and contacts identified in the same manner. As more antigen diagnostic testing has been approved under emergency use authorized by FDA, the number of probable cases in Alabama continues to increase,” ADPH said. “More healthcare providers, including physicians’ offices, urgent cares, and some emergency rooms, are using antigen testing. Thus, ADPH has revised some charts and graphs on its dashboard to capture the most current situation for COVID-19 in Alabama.”

Taylor turning into a weapon for the Patriots

After a winding road led him to Pike Liberal Arts, wide receiver Jay Taylor has turned himself into a potent... read more