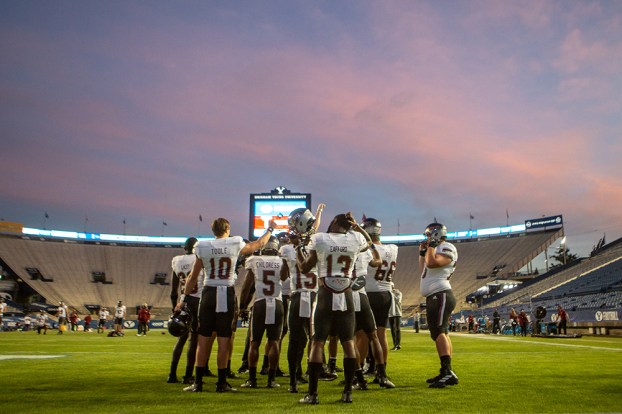 “Our team is very disappointed, and so are we as coaches,” head coach Chip Lindsey said. “We did not play well or coach well tonight. We had some opportunities early to take control. We had the early turnover that we didn’t take advantage of. Our defense was playing really well early, but our offense did not do a good job of helping those guys out. Last week, we did a really good job of playing complimentary football. We will rebound from this. We just have to get back to work and get better before next week.”

Up 7-0 at the end of the first quarter, BYU (2-0) seized control of the game early in the second quarter when Cougars quarterback Zach Wilson capped an eight-play 74-yard drive with a 1-yard touchdown run. For the game, Wilson completed 23-of-28 passes for 392 yards and a pair of touchdowns. The signal-caller also ran for a pair of scores.

Troy looked to sneak back into the game late in the second quarter, when B.J. Smith ran into the end zone from two yards out with 65 seconds to play in the first half. The score, was Smith’s first touchdown in more than a calendar year and cut the BYU advantage to just 21-7.

BYU quickly regained the momentum, converting a long 54-yard field goal as time expired that gave the home team a 24-7 advantage at the half.

Following the halftime break, the Cougars, behind a 75-yard touchdown pass from Wilson to Dax Milne, took a 31-7 lead with 14:27 to play in the third quarter.

After the Trojans forced a Cougar turnover on downs, Troy quarterback Gunnar Watson found Tray Eafford over the middle for what looked to be the Trojans second touchdown of the night, but an offensive holding call wiped the Troy score off the board.

Watson completed 21-of-33 passes on the evening for 162 yards, while Eafford hauled in a pair of passes, including a 55-yard reception that set up the lone Trojan touchdown. The reception was his third reception of at least 50-yards in his career.

Ask Scott Sexton what he likes about music and he could answer in alphabetical order. Ask him what he knows... read more