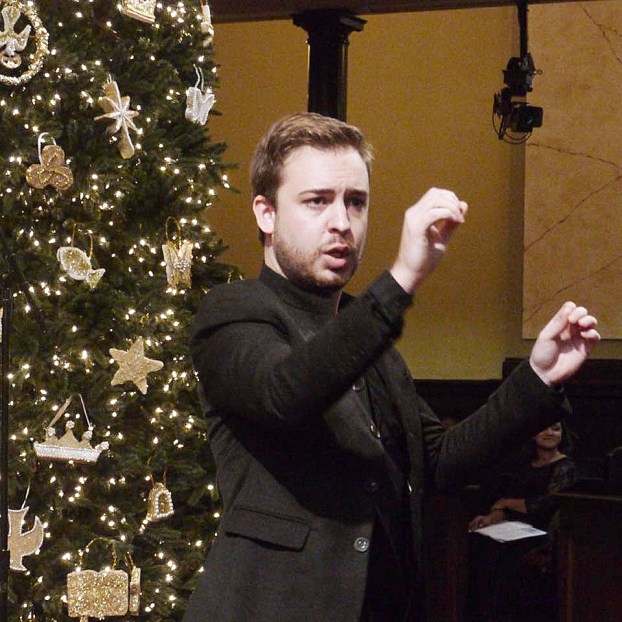 Scott Sexton, an acclaimed musician and choral director, is home in Troy while pursuing his Ph.d, after global travels and teaching in Mississippi. Sexton will also be teaching Collegiate Singers and the jazz vocal group frequency at Troy University this fall.

Ask Scott Sexton what he likes about music and he could answer in alphabetical order.

Ask him what he knows about music and, probably, his answer, could once again, be in alphabetical order.

For a young man, Scott Sexton has a wealth of knowledge about music and a world of musical experience.

Of course, he will say that he is just scratching the surface of both.

Sexton is back home in Troy … for now. He is an adjunct teacher at Troy University where he is teaching the Collegiate Singers and the vocal jazz band, frequency. He is also teaching private piano and private voice at the university.

And, he is working with his mentor and, now, colleague, Diane Orlofsky.

Sexton is a founding student member of frequency and is now its leader.

“Who better to shepherd and steer this beloved group forward but someone who understands the special nature and place for both the vocal jazz genre and history and legacy of frequency,” Orlofsky said. “The future is bright under Scott’s leadership.”

Sexton earned an undergraduate degree from Troy University and a master’s degree from the University of Mississippi. He is currently studying for a Ph.D. in music education from Auburn University.

His interest in and talent for music came from both sides of his family.

“Growing up, both sides of my family were musical,” Sexton said. “My mom loved to sing and my dad ‘piddled’ on the guitar.”

Sexton said when his mother’s side of the family got together, they would gather around the piano and sing, especially at Christmas time.

“But it wasn’t unusual to have a string band playing bluegrass at a gathering of my dad’s family,” he said.

With music running through his blood and “phenomenal” music teachers, including Lyra Crapps and Amanda Ford, to guide and direct him. Sexton soon realized that music was his life’s calling.

After graduating from his hometown university, he moved to Mississippi to further his education and explore opportunities there.

At Ole Miss, Sexton studied choral conducting and music education. After graduation,  he moved down to Jackson where he taught at St. Andrew’s Episcopal School.

At St. Andrew’s he held the position of director of choral music and Fine Arts Department chair.

Sexton completed Kodaly certification which focuses on the expressive and creative skills of musicianship rather than the theory of instrument skills. He received a scholarship that enabled him to study at the summer school of the Kodaly Institute n Kecskemet, Hungry.

Sexton said that opportunity directed his attention to detail and command of musicality in his music teaching.  As a result of that learning and teaching opportunity, his students earned individual and ensemble honors at the local, regional and national levels.

Sexton has an interest in international and folk music in the choral classroom.

“I was fortunate to be able to take students on several trips to Ghana, West Africa and also had the opportunity to spend four summers in Balkan Europe, particularly in Bosnia and Herzegovina,” he said. “There, I studied choral music and how Bosnians are using this music to foster ethnic reconciliation in the aftermath of the Bosnian War.”

In Mississippi, Sexton was a co-producer of the first-ever Mississippi Balkan Choral Festival. He served at the artistic director for the Mississippi Girlchoir and founded and directed Mississippi Harmony, a multigenerational community choir.

He is also affiliated with Village Harmony, a Vermont-based organization the promotes the method and practice of teaching and performance of world choral music.

With his education, his teaching experiences, his world travels and his desire to bring the best quality of music educator to all those under his tutelage, Sexton has returned home to teach and to focus on finishing a Ph.D. in music education at Auburn University.

“My research focuses on historical music education, particularly studying teachers and their philosophies that were movers and shakers of multicultural music,” he said.  “I am also focused on music-related historical research and biographical studies.”

As much as Sexton enjoys teaching, as excited as he is to be home, as honored as he is to be teaching at Troy University, he has a wild side “that makes me want to do other stuff, including music related historical research and biographical studies.

Sexton said he also has a strong desire to travel and to experience different kinds music, of other cultures, in different places.

“And, who knows, I might even pick up a guitar and start playing bluegrass music,” he said, laughing.

The Troy Trojans put their 1-0 record on the line Saturday evening when they take on nationally ranked BYU in... read more