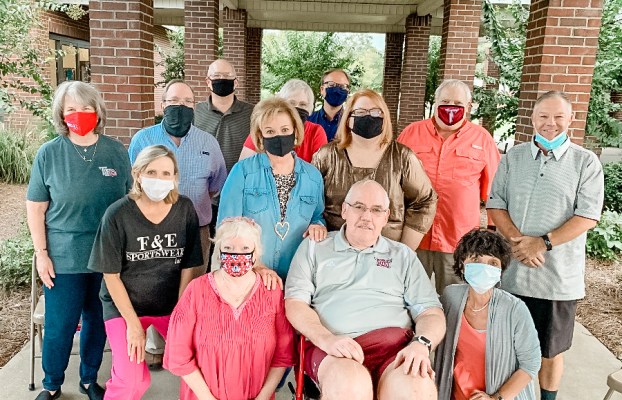 David Laliberte, seated in center at top, was treated to a drive-by sendoff from friends and church members on Wednesday.

Park Memorial United Methodist Church hosted a Portico Send-off for David Laliberte Wednesday night and a large number of friends came to wish him all the best as he moves from his home here in Troy.

Laliberte lost his wife, Jean, in June and made the decision for he and his dog, Annie, to go live with his daughter, Jeni Gruber and her family in Nebraska.

Barbara Synco, a church member and friend, said Jeni’s husband, Nick Gruber flew to Troy on Wednesday morning to drive back to Nebraska with his father-in-law.

“Nick and Dave left early this morning (Thursday) on the 17-hour drive to Nebraska,” Synco said. “Nick and Jeni have two young sons and they live in a town just outside Lincoln. So, Dave will be with family and that will be a blessing for all of them.”

The “best wishes” send-off was held in compliance with the restrictions of COVID-19.

“Dave was seated in a chair under the portico and his many friends drove through, let down the car windows, wished him all the best and said their goodbyes,” Synco said. “Everyone let Dave know they will be thinking about him. Many brought cards for him. He will be missed at the church and throughout the community.”

David Laliberte is originally from Massachusetts. He and Jean moved to Troy about 30 years ago and immediately became a part of the community.

He taught math at Charles Henderson middle and high schools and retired from public education several years ago. He was the organist at Park Memorial for several years.  Jean retired from Troy University in 2017 as associate Vice Chancellor for Development.

“Dave was a fantastic math teacher and tutor, said Edith Synco. “Many of his students called him, ‘Mr. La.’ He was the organist at Park Memorial for several years and also our choir pianist.”

In his retirement, Laliberte continued to tutor children and remained active in the community.

He worked at WTBF Radio, first with high school sports and later as a sidekick to the late Ralph Black on the Morning Show.

David “Doc” Kirby, WTBF, said Ralph Black enlisted Laliberte to work with him on sports programs and then on the Morning Show.

“David and Ralph were buddies and Ralph knew how smart Dave is and how interesting he is,” Kirby said.

“They made a good combination on the Morning Show. The chit-chat between the two of them drew a large audience for more than a decade.”

David Laliberte will be missed by the Troy community and he will be remembered fondly by all who know him, said Edith Synco.

“We will all miss Dave but we are thrilled that he is starting a new chapter in his life with his family in Nebraska,” Synco said. “We all wish him the very best and every happiness.”

The U.S. death toll from the coronavirus topped 200,000 this week, as the virus claimed roughly the entire population of... read more