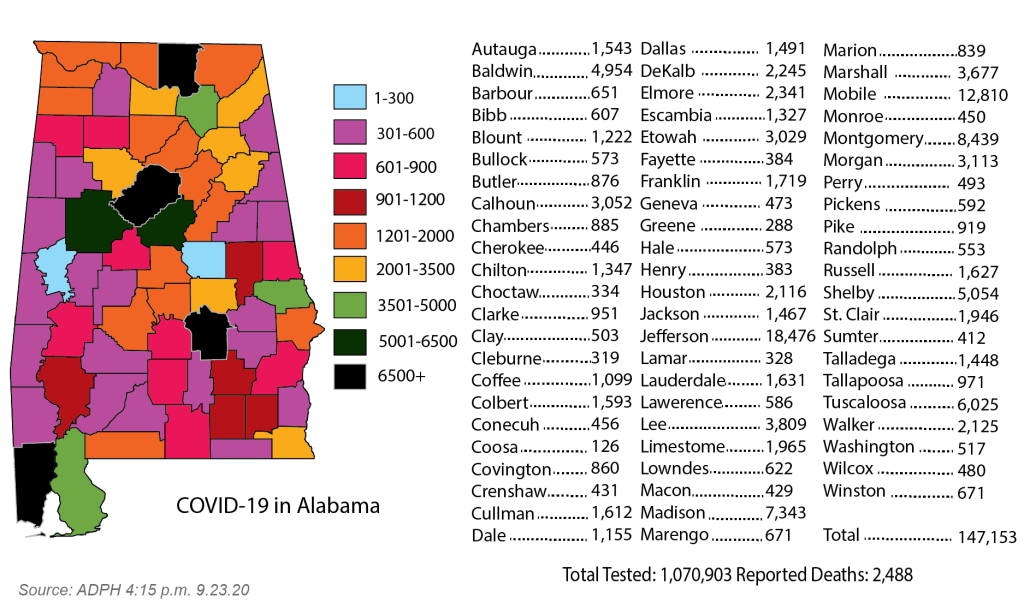 The U.S. death toll from the coronavirus topped 200,000 this week, as the virus claimed roughly the entire population of Huntsville, Alabama.

Locally, Pike County added seven cases of COVID-19 on Wednesday. The Alabama Department of Public Health reported three new confirmed cases along with four probable cases, bringing totals for the county to 919 and 260 respectively, with only eight confirmed deaths.

The nationwide death total,by far the highest in the world, hit a once-unimaginable threshold six weeks before an election that is certain to be a referendum in part on President Donald Trump’s handling of the crisis.

The number of dead is equivalent to a 9/11 attack every day for 67 days. It is roughly equal to the population of Salt Lake City or Huntsville, Alabama.

And it is still climbing. Deaths are running at close to 770 a day on average, and a widely cited model from the University of Washington predicts the U.S. toll will double to 400,000 by the end of the year as schools and colleges reopen and cold weather sets in. A vaccine is unlikely to become widely available until 2021. “The idea of 200,000 deaths is really very sobering, in some respects stunning,” Dr. Anthony Fauci, the government’s top infectious-disease expert, said on CNN.

The bleak milestone was reported by Johns Hopkins, based on figures supplied by state health authorities. But the real toll is thought to be much higher, in part because many COVID-19 deaths were probably ascribed to other causes, especially early on, before widespread testing.

Trump said it was “a shame” the U.S. reached that number but argued the toll could have been much worse.

“I think if we didn’t do it properly and do it right, you’d have 2.5 million deaths,” Trump told reporters at the White House before leaving for a campaign rally in Pittsburgh. He added that the United States is now “doing well” and “the stock market is up.”

He also gave his often-repeated broadside that China was at fault for the pandemic. In a prerecorded speech to the U.N. General Assembly, he demanded that Beijing be held accountable for having “unleashed this plague onto the world.” China’s ambassador rejected the accusations as baseless.

On Twitter, Democratic presidential candidate Joe Biden said, “It didn’t have to be this bad.”

“It’s a staggering number that’s hard to wrap your head around,” he said. “There’s a devastating human toll to this pandemic — and we can’t forget that.”

For five months, America has led the world by far in sheer numbers of confirmed infections — nearly 6.9 million as of Tuesday — and deaths. The U.S. has less than 5% of the globe’s population but more than 20% of the reported deaths.

Saturday’s trip to be business as usual for the…