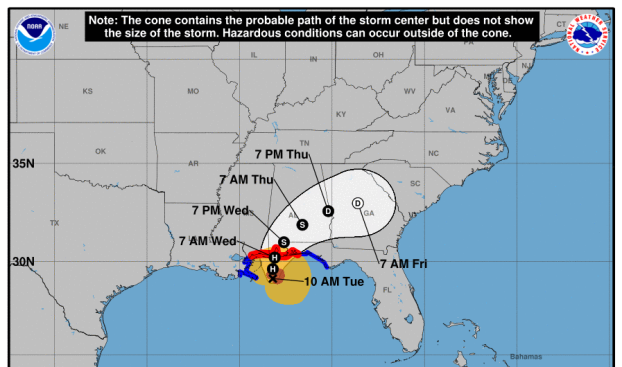 Updated, 1:15 p.m.: Troy University has cancelled all in-person classes for Wednesday and Thursday.

At 11 a.m. Tuesday, the slow-moving Hurricane 1 storm was projected to make landfall sometime Wednesday morning near Mobile Bay, before hooking east and traveling across the state. Forecasts at presstime indicated the center of the storm could move directly over Pike County and the Montgomery area by midday Thursday.

Forecasts are calling for heavy rains, up to 8 inches in Pike County, with a moderate threat for high winds.

Gov. Kay Ivey held a press conference Tuesday morning, urging residents to evacuate the low-lying areas along the Gulf Coast. A state of emergency has been declared, as well as a federal disaster emergency.

Attorney General Steve Marshall announced that Alabama’s price gouging law is in effect in advance of the arrival of Hurricane Sally this week.

Alabama’s price gouging law comes into effect when the governor declares a State of Emergency and it prohibits the ‘unconscionable pricing’ of items for sale or rent. Effective at 3:00 p.m., September 14, Governor Ivey declared a State of Emergency “based on the imminent threat of Tropical Storm Sally, which has now strengthened into Hurricane Sally, with the potential to make landfall in or near Mobile and Baldwin counties.”

The eye of Hurricane Sally is expected to enter southeast Alabama by early Wednesday and hurricane warnings are in effect for Mobile and Baldwin counties.

“Alabamians should be on-guard to possible price gouging and home repair fraud during and after Hurricane Sally’s passage through our state,” said Attorney General Marshall.

Although what constitutes an unconscionable price is not specifically set forth in state law, a price that is 25 percent or more above the average price charged in the same area within the last 30 days—unless the increase can be attributed to a reasonable cost—is a prima facie case of unconscionable pricing. The penalty is a fine of up to $1,000 per violation, and those determined to have willfully and continuously violated this law may be prohibited from doing business in Alabama.

Troy University reported an additional 17 cases of COVID-19 among students at the Troy campus on Monday. The update included... read more