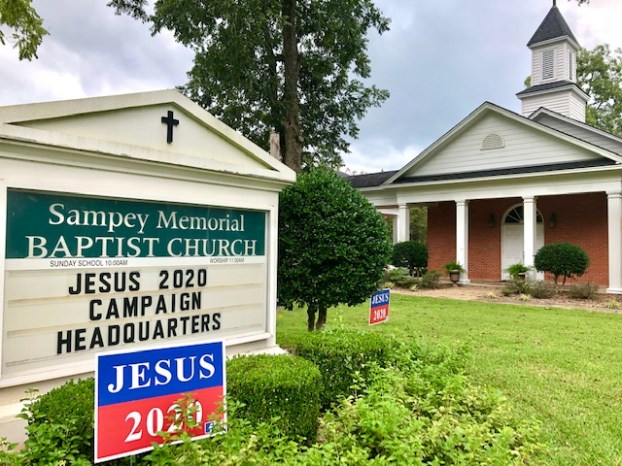 Somewhere along the highway, in almost every state in America, a road sign is posted that reads “Jesus2020.” And for a few seconds, the eyes of highway travelers are on Jesus.

That’s not exactly the way the ladies at the Sampey Memorial Baptist Church up the road in Ramer had planned “to ignite a spark in the darkness,” but that’s the way it happened.

Martha Sikes, Joyce Hubbard and Susie Halse decided they should be more vocal, that they, as individuals, as Sunday school members, and as a church, should encourage others to keep their eyes upon Jesus.

Sikes asked her Sunday school class at Sampey Memorial Baptist Church for ideas on what the class and the church could do to ignite a spark in the darkness of the times of 2020.

There, in that Sunday school class in that small church in rural Alabama, the idea originated to bring the name of Jesus into clear focus.

And, what better way, in the political climate of 2020, than to post yard signs to campaign for Jesus in 2020.

Their idea was novel. Their mission was local.

“We wanted to campaign for Jesus but our mission was not, and is not, political,” said Hubbard who designed the red, white and blue Jesus 2020 campaign-style signs. “Jesus is already ‘the’ winner. Jesus is in charge.”

Neither Sikes, Hubbard nor Halse had any idea their campaign for Jesus would attract the attention and gain the support that it has.

Wells Printing in Montgomery printed the yard signs and Sampey Memorial Baptist began giving them away as a church ministry.

“The response was very encouraging and so heartwarming.” Hubbard said. “As soon as Sampey Memoria began giving away the signs, people wanted to support what the church was doing with donations. Their donations made it possible for us to order more signs. But the signs are not for sale. This is not a fundraiser of any kind.  It’s a movement to lead Christians in prayer for revival in America.”

As the Jesus2020 yard signs became more visible, the requests for the “campaign for Jesus” gained momentum.

“The campaign gained a lot of exposure,” Hubbard said. “Articles were written; it was posted on social media and, when the campaign for Jesus was on FoxNews.com, it really took off.”

The requests for the Jesus2020 signs started coming in from near-by states and then from more distant ones.

“We have had requests, thousands of requests, for the Jesus202 signs and from all across the country,” Hubbard said. “From New York to California and from Michigan to Florida and Texas, so many from Texas.”

The requests for the signs keep coming.

There have been requests from as distant as Puerto Rico and Nigeria. An article about the campaign for Jesus signs was in a Swedish newspaper.

“People are disheartened and often in despair. People seem to be looking for something to grasp,” Hubbard said. “Something to give them hope during this crucial time. The Jesus2020 yard signs are a reason to talk about Jesus. In today’s world, we are weighed down by so many things. People are realizing what we really need in 2020 is Jesus.”

The hope and the prayer of the leaders of the Jesus2020 campaign are for Jesus to be a part of the 2020 election.

“In our world today, we need to turn our eyes on Jesus in all that we do,” Hubbard said. “We can’t continue to hide our light under a bushel.”

The Alabama State Council on the Arts has awarded 137 grants totaling $2,290,710 to 113 grantees across the state. Organizations... read more