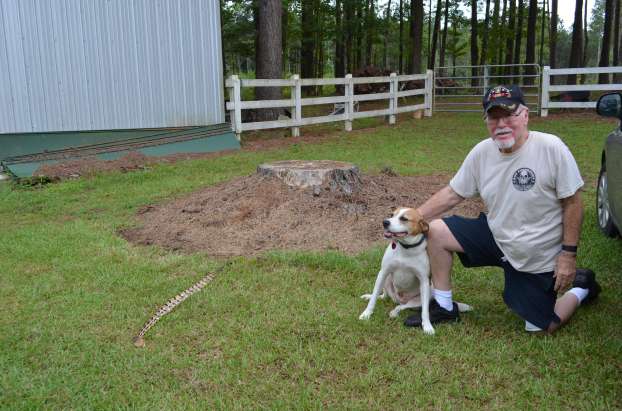 Bob McLendon poses with his dog, Tobi, and the large rattlesnake he killed after the pup alerted him to danger. McLendon, who was previously bitten by a rattlesnake, says he would have stepped on this one, if not for his dog.

About 18 years or more ago, Bob McLendon was bitten by the largest rattlesnake he had ever seen.

But McLendon had the presence of mind not to try to kill the snake, rather call 911 and wait for help to arrive.

“Chasing the snake would have increased my heart rate and pumped the venom through my body at a faster rate,” he said. “Not going after the snake probably saved my life.”

When McLendon arrived at the hospital in Troy, there was concern that he would not make it out of the emergency room.

“I was in the hospital for eight days and in ICU for three,” he said. “I’ve always had great respect for snakes and, after that experience, I have even more respect for them. I’m always cautious when I’m at a place or in a situation that is a prime location for snakes.”

And, so, last week when McLendon arrived at his home in Henderson, he heard the furious barking of his “best friend.”

“Tobi was on the front porch and barking like mad,” he said. “I thought there was probably a possum on the porch because that has happened before.”

However, McLendon approached with caution.

“There, coiled under the steps to the front porch, was a large rattlesnake,” he said. “It was coiled and ready to strike.”

McLendon said, if he had put a foot on the steps the rattler would have struck him for sure

“The steps are wood and open and the rattler would have had a clear shot at me,” McLendon said. “I got my gun and shot at him five times. I don’t know if I hit him all five times but I killed him. It was a four-and-a-half foot timber rattler with six buttons.”

McLendon said he doesn’t know if he could have survived another rattlesnake bite.

“But, what I do know is Tobi probably saved my life,” he said. “Had it not been for her, I would have stepped right in striking distance of a killer snake.”

“If you are bitten, don’t chase after the snake, get to a doctor or hospital as soon as you can and try to remain calm until you get medical attention,” he said.

Pike County has moved ahead  to round-two in the Alabama Census Bowl 2020 and remains in the running for the... read more