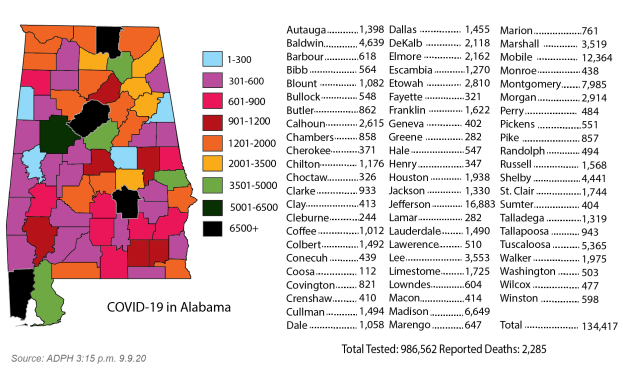 At Troy University, students reported 13 more cases on the Troy campus and one on the Pensacola cases.

The local cases included nine off campus, one at Alpha Tau Omega, one at Cowart and two at Trojan Village. The new cases bring the total self-reported cases at the Troy campus to 295 students and 12 teachers since Aug. 3.

Statewide, just over 700 cases were added overnight Tuesday, with 122,580 confirmed cases and 11,837 probable cases reported. The probable cases are those diagnosed by rapid response tests, also known as antigen tests. Hospitalizations dropped to 778, one of the lowest daily counts since June 30.

Nationally,  Dr. Anthony Fauci says he’s sticking with his projection that a safe and effective coronavirus vaccine may be ready in early 2021. He says it’s possible it could be sooner, but “unlikely.”

The White House adviser on the coronavirus told “CBS This Morning “the more likely scenario is that we will know by the end of this calendar year and hopefully we’ll be able to start vaccinations in earnest as we begin early 2021.”

Fauci says it’s routine for late-stage vaccine studies to be put on hold because of side effects. A study by AstraZeneca of a potential coronavirus vaccine was recently paused for safety reasons after an illness from a shot in a recipient in Britain.

He says it’s “really one of the safety valves that you have on clinical trials such as this.”

The United States leads the world in coronavirus cases with 6.3 million and nearly 190,000 deaths.

A cook’s book: Synco sharing her ‘treasures’ for a good cause

Three years ago, Edith Synco entered eight recipes into a data base. At that time, she had thoughts of putting... read more