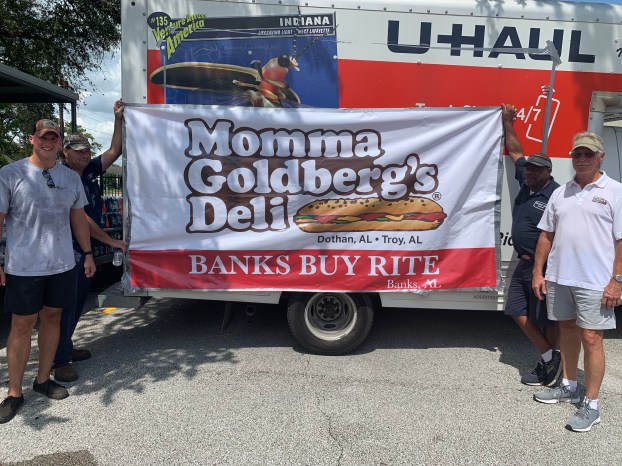 Business owners team up to send relief to Louisiana

On August 27, Hurricane Laura struck Louisiana as one of the most powerful storms in U.S. history, with early reports of six dead and widespread destruction across the state.

As Mike Long, owner of Momma Goldberg’s in Troy and Dothan, watched the television reports and viewed the images, he was compelled to respond to the needs.

“Watching the devastation, I realized that it could have been us,” he said. “Alexandria, Louisiana is about 150 miles north of Lake Charles and sustained 79 miles-per-hour, straight-line winds for more than three hours. We are about 150 miles from the coast and sustained winds like that would have torn us apart. It could have been us. I had to do something to help those who lives were blown apart.”

On Wednesday morning, Long drove a truckload of bottled water 450 miles from Troy to First Baptist Church in Lafayette, Louisiana. From there, the 10,500 bottles of water will be distributed to areas of greatest need.

For Long, that was, with the help of others, what he could do in response to the needs of Hurricane Laura’s victims.

Long said Chris Weith shared his desire to respond to the needs of the victims of Hurricane Laura’s wrath.

“On Sunday, Chris spoke at First Baptist of those needs and the desire to, in some small way, offer help,” Long said. “The donations from the church/congregation was about $900. Banks Buy-Rite donated $500 so we were on the way to our goal of filling a truck with bottled water to be distributed to hurricane victims in Louisiana.

All Star Collision and WTBF contributed to the fundraising efforts and individuals were very generous in their giving.

Long donated 20 percent of the Thursday night proceeds from both his restaurants and will make up any difference there might be.

“Christians believe they should respond to people in desperate need,” Long said. “The needs in Louisiana were, and are, desperate. Helping them was the right thing to do. Hopefully, if we, in Pike County, are ever in need like that, there will be those who will come along and help us.”

Empty Bowls 2020 is set for Friday, September 18 at the Bush Baptist Church Christian Life Center. The times are... read more