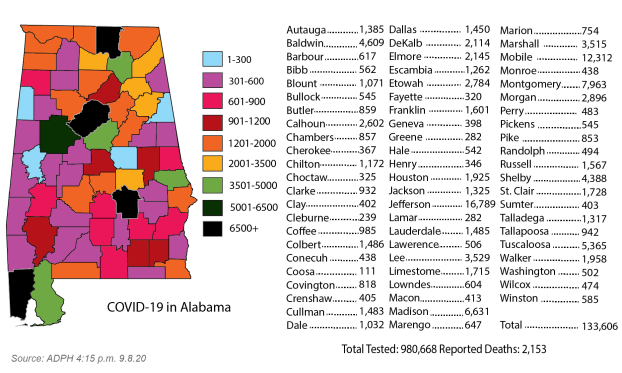 Troy University reported another 24 cases of COVID-19 among students in Troy on Tuesday, as Pike County’s combined confirmed and probable cases topped 1,000.

The self-reported totals included 21 off-campus students; two at Trojan Village; and one at Shackleford Hall. Another student on the Montgomery campus also reported a positive test.

Based on reported on-campus enrollment of nearly 6,600, some 4.2 percent of students on the Troy campus have self-reported positive tests for COVID-19.

Troy University will begin randomly testing students and faculty for COVID-19 this week. The university will randomly select 3 to 5 percent of the campus population for testing each week to determine how much of the COVID-19 virus is spreading. Although not mandatory, university officials have strongly urged students and staff to participate. The testing is part of the GuideSafe Sentinel Testing program, which is being deployed at college campuses across Alabama.

In Pike County, ADPH on Tuesday reported 853 confirmed cases along with 201 presumed cases, pushing the county’s total cases over 1,000 since tracking began in March.The county’s 14-day positive rate dropped to 6.76 percent on Tuesday. Pike County also remains under the “high risk” designation according to the ADPH.

Statewide, an additional 405 confirmed COVID-19 cases and 228 presumed cases were reported on Tuesday, bringing the total cases to 133,606, including 121,879 confirmed and 11,727 probable, according to the Alabama Department of Public Health. The presumed cases are those who tested positive using an antigen or quick response test.

Elsewhere in the state, the city of Tuscaloosa eased pandemic restrictions and began allowing bars to reopen with limits Tuesday, days after the University of Alabama reported nearly 850 new cases of the coronavirus, which has affected more than 2,000 students at the school. The change followed complaints from bar owners that a two-week shutdown, meant to stem the spread of the illness on campus, was unfair and hurting business. But critics charged that allowing bars to reopen after the closure would make it easier for the new coronavirus to infect people. School and city officials said the university appears to be headed in the right direction in combating the virus despite reporting 846 new cases Friday.

“Although far from over, this positive trend provides an opportunity for a limited reopening of bars which have sacrificed a great deal to protect our healthcare system and economy,” Mayor Walt Maddox said in a statement announcing the reopening.

Bars, including those popular with students in an area near campus called “The Strip,” will be subject to capacity limitations. Also, patrons can be served only when they are seated, and curb parking along The Strip will be blocked at night to allow more space for people waiting to get in bars.

Some bars tried to lure patrons by announcing the reopening on social media with drink specials and games.

Public health officials are worried about an uptick in cases in Alabama that began after public schools, colleges and high school football games all resumed last month.

There were about 333 new cases per 100,000 people in Alabama over the past two weeks, which ranks fourth nationally, according to researchers from Johns Hopkins University.

While the virus causes only mild to moderate symptoms for most people, it can be deadly to the elderly and people with other health problems.

Libby Liberty won’t be visiting students in Pike County this fall, but the popular citizenship program she teaches will continue.... read more