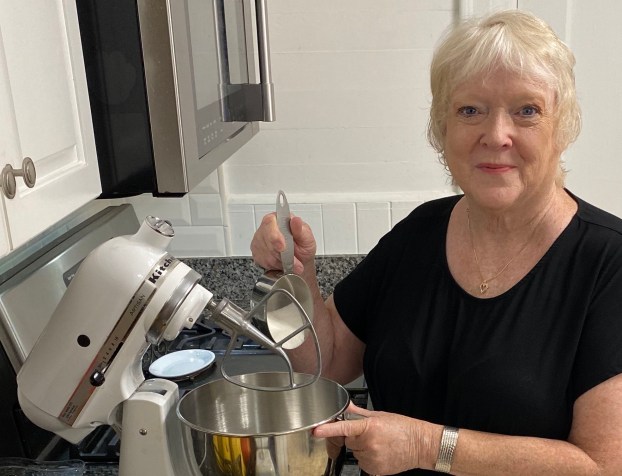 A cook’s book: Synco sharing her ‘treasures’ for a good cause

Three years ago, Edith Synco entered eight recipes into a data base.

At that time, she had thoughts of putting the many recipes she has collected over the years into a cookbook. But it seemed that Edith Synco’s cookbook idea was always on the backburner.

“A cookbook was something that I had wanted to do for a long time but I kept coming up with excuses – not reasons –excuses,” Synco said, with a smile. “But my friend Jean Laliberte kept encouraging me to “Do the cookbook, Edith!”

But excuses kept getting in the way. Until.

“When Jean died in June, I knew I had to put everything else on the backburner and, do as Jean said. and, ‘Do the cookbook.’”

Edith Synco’s “Fabulous Kitchen Traditions” is now in print as a memorial to her friend, Dr. Jean Laliberte.

Laliberte’s daughter, Jeni Laliberte Gruber, designed the cover for the cookbook that is filled with recipes that are representative of the strong women in Synco’s life.

The recipes go back to the many happy hours that Synco spent it the kitchen with her grandmother.

When Synco was a little girl, her mother was busy growing a family. Her grandmother, Grand, was enjoying the slower pace of life. So, it was “Grand” that taught little Edith how to cook and how to appreciate the tried and true recipes that had been handed down through the generations.

“Grand’ was a wizard in the kitchen,” Synco said.  She created her own recipes. She tried other recipes that appealed to her, adapted them and improved on them.

Many of Synco’s grandmother’s recipes were not written down and had to be “adapted” from the memories of family members and friends. The number of those “heirloom” recipes in Synco’s cookbook is about 45 but Synco didn’t limit the recipes in her cookbook to heirloom and tried and true favorites.

She, laughingly, said several friends and family members agreed to share their secret recipes or the “secret ingredient” in their closely held recipes.

“But they won’t be secrets any longer,” Synco said, laughing.

“Edith Synco’s Fabulous Kitchen Traditions” is traditional in that it includes meats and sweets, soups, breads, veggies and breads and appetizers and also a few recipes that won’t be found in other cookbooks.

Edith shares the recipes for several of her popular cheesecakes that were sold once a week at Cakes by Joyce, a scuppernong wine and her grandmother’s cough medicine that will stop any cough in two hours.

“The cookbook is filled with great recipes from my precious family members and friends along the way,” Synco said. “Putting the cookbook together was a wonderful walk down memory lane. It brought back so many memories of learning to cook and, too, about life and the living of it.”

Synco remembered when she was about eight years old and was taking a lemon meringue pie that her grandmother had just baked out onto the screened in porch.

“Grand’s favorite pie dish slipped off the metal tray, hit the floor and broke,” Synco said. “I was broken-hearted but Grand said it was glass. That glass was supposed to break.

“I learned something very important that day that has carried over all these years. When glass breaks, it breaks because it is supposed to break. That’s the way life is.”

The cookbooks are available directly from Synco. For more information, call 334-268-1072.

Troy University reported another 24 cases of COVID-19 among students in Troy on Tuesday, as Pike County’s combined confirmed and... read more