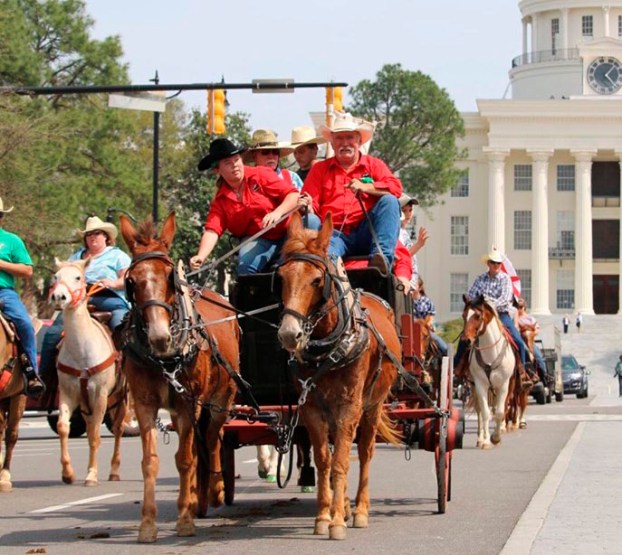 Time has made a change in things.

Not that many years ago, there was a dairy over most every hill and a mule in every barn.

To entertain children on long drives on two-lane roads, they were challenged to count the mules in the pastures. Grownups stamped gray mules for good luck.

Today, mules in the pasture are as much an oddity as a grazing giraffe.

Oh, a few men around these parts – including the late Grover Poole and Don Renfroe, Joey Strother and Bob McLendon, were mule-driving men. When there was an occasion – a parade or an event at the Pioneer Museum of Alabama or anywhere around. They would readily hitch their mules to the wagon and be the highly-anticipated tail-end to any parade or ride passengers around town or the museum grounds until dark took them home.

But, counting mules, gray or otherwise, around Pike County could now be done on one hand and perhaps a toe.

And, that number decreased by two on Saturday last when Bob McLendon traded his red mules, Sassy and John, to two mule skinners from Kentucky who came down and haul them away.

“I wouldn’t have sold my mules to anybody except someone like Ethan Harrington and Jerry Ross who are going to use them just like I have – in parades, re-enactments and living history events,” McLendon said.

Back around 2015, McLendon traded a Harley-Davidson to a man in Tennessee for Sassy and John.

“I said I traded a ‘hog’ for two, well…” McLendon said laughing. “Those mules became like a part of the family. They could pull everything from a wagon to a cannon. They pulled the wagon for rodeos, parades, re-enactments, funerals and historical programs. They were in every parade anywhere around and rode folks at every event at the Pioneer Museum.

“That’s why I hated to let them go but I’m getting older and my health is not what it used to be. I just didn’t have a choice but I wanted Sassy and John to continue to be a part of living history, so I wanted until the right person came along – somebody that knew about mules .. somebody that cared about them the way I do.”

McLendon, laughingly, said a mule can be ridden but can and will throw even an experienced cowboy.

“Mules are thought to be dumb animals but they are much smarter than horses,” McLendon said. “Mules aren’t stubborn; they’re just cautious. If a mule doesn’t feel safe with the circumstances, no matter what you do, you can’t move him. Horses react; mules think.”

He recalled the time when John refused to budge an inch. “No matter what we did, he stood his ground,” McLendon said. “Finally, in checking things, we found a part of his harness had been put on upside down. When we fixed that, John moved.”

McLendon said, if a mule is pulling a wagon and gets out of breath, it will stop until it catches its breath. Then it will start moving again. “A horse will pull itself to death but a mule knows when to stop,” he said. “No matter how much grain you put in front of a mule, it knows when to stop eating but a horse will keep eating until it founders and falls over dead.

“Mules are surefooted animals. That’s why they are used on mountain trails. Tourists ride them at places like the Grand Canyon. “But most of the mules in today’s world are pulling wagons in parades, at re-enactments and living history facilities and events.

McLendon said mules are too often misunderstood. They are viewed as stubborn and dimwitted. But they are smart, crafty and hardworking. “Mules played a vital role in ‘cultivating’ America and we owe these animals a great debt of gratitude,” he said. “Making the decision to give up Sassy and John was difficult but I wanted someone who would take care of them and continue to use them in the same way I have. Ethan is a farrier and he knows, understands and appreciates the mule. Sassy and John will be ambassadors for the often-misunderstood mule. That’s the only way I was able to let them go.”

But, Bob McLendon has not seen the last of Sassy and John. He has already made plans to attend their first parade in Kentucky. That will be a happy reunion for a man and his mules.

Patriots score early and often in win over Hooper

The Pike Liberal Arts Patriots scored on the opening kick and rode the early lead to a 49-0 win over... read more