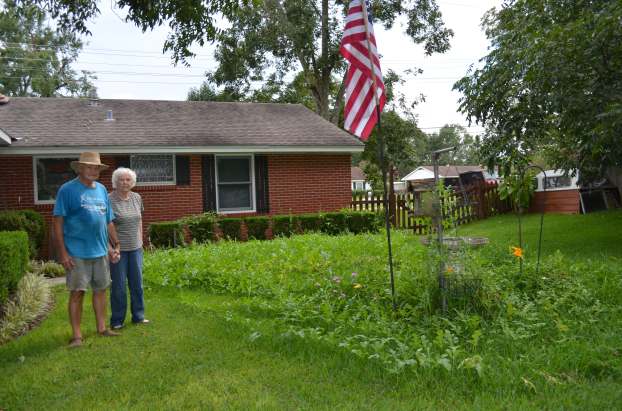 Couple awed by tenacity of a single watermelon vine

Most people, young and older, know the story of Jack and the Beanstalk.

Jack, a poor country boy, traded the family cow for a handful of magic beans.

From the magic beans grew an enormous beanstalk that reached into the clouds.

That’s as far as the implications reach for Pat and Becky Anderson’s enormous story.

Becky Anderson gives credit for the enormous watermelon vine to her husband.

“I can’t explain it,” Pat said with a smile and a shake of his head. “It all started with this one little watermelon plant in this one container with dripping water.”

“It,” to which Anderson referred, is a single watermelon vine that has grown, just as Jack’s beanstalk, into an enormous vine and hasn’t stopped growing.

“The vine started to run a little and then a little more and then it began to spread,” Pat said.

“Soon, it covered a pretty good space on the back lawn and then a larger space and then an even bigger space.

“I had never seen a single watermelon vine grow and spread like that.”

The Andersons said, for sure, that no miracle growing product was applied.

“We didn’t need it,” Becky said, laughing. “It was growing on its own.”

But according to what Mr. Google says about the average length for bush types of watermelons, a vine of about one foot grows out and large lobed leaves begin to form. A runner will continue to grow until it reaches about 12 feet in length.

But the single watermelon vine in the 500 block of 2nd Avenue has grown until it has engulfed much of the Anderson’s backyard lawn. And, it still on the grow.

It seems to double its growth during the day and throughout the night.

“Every day in grows more and more,” Pat said. “It’s has started to climb. It has trailed up to the birdhouse and is circling it. The vine is growing into the shrubs and is going toward the outside wall of the house. We have no idea when it will stop growing.”

The single watermelon vine seems to have a mind of its own. And, it appears that, perhaps, their house could be vine covered before summer’s end.

Pat said the vines will begin to die down at some point. At that time, he will be able to pull the fruits of the vine’s harvest.

“Right now, I can’t see all the watermelons,” he said.

“They are small and are well-hidden by the leaves. I don’t know what kind of melons they are but they appear to be a seedless variety.”

The Andersons have attempted to count the melons but the broad coverage of leave keeps them at bay.

“We’ll have to wait to know exactly how many melons this one watermelon vine has produced. It will be interesting to know.”

Until the vine gives way to Mother Nature, Pat and Becky Anderson will just sit on their covered porch and watch hummingbirds feed and the watermelon vine grow.

A Troy man is charged with capital murder in connection with the August 15 fatal shootout at the Pike County... read more