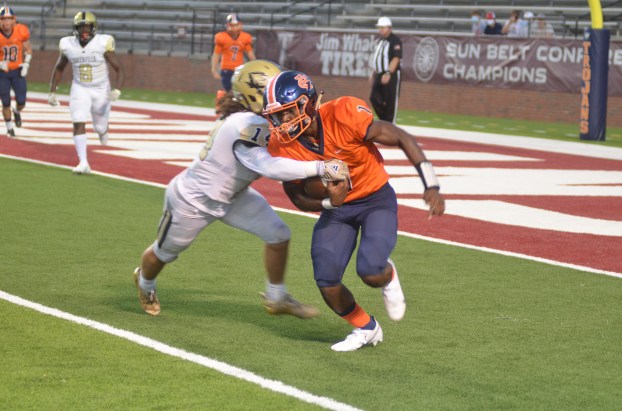 A swarming Greenville defense and a sputtering Charles Henderson High offense resulted in a 21-0 Tiger win over the Trojans Thursday night in a Class 5A, Region 2 matchup in Troy’s Veterans Memorial Stadium.

CHHS, falling to 0-2 on the season, ended the night with an unofficial total of 56 offensive yards and generated only three first downs, one of those compliments of a Greenville penalty.

The Tigers, improving to 3-0, got on the board first when senior quarterback Sam Sherling hit wide receiver Quentin Hamilton for an 11-yard touchdown strike with 5:14 to go in the first quarter. Chrishon Crenshaw ran the ball in for a two-point conversion, and it was 8-0 Greenville.

The Trojans fumbled on the first play of their next possession, Greenville recovered, and it took only one play for Sherling to connect with Christopher Little for a 37-yard touchdown pass play. Javoris Boggan kicked the extra point, and the Tigers led 15-0 with 4:47 remaining in the first quarter.

Greenville pushed the ball to the CHHS 1-yard line in the final two minutes of the first half, but Damien Hart of CHHS recovered a loose ball, giving the Trojans possession at their own 9, where they ran the clock out in the first half.

The Greenville defense was staunch in the first half, not allowing a CHHS first down.

CHHS got the ball to the Greenville 26 on a pass interference call against the Tigers, but three plays later Greenville’s Jonathan Purifoy, Jr., intercepted a pass and raced 95 yards down the right sideline for the touchdown. The extra point was no good, the score was 21-0 to go in the game, and that held up to be the final.

Greenville’s Jacob Foster led all rushers with 57 yards, Jermaine Abner picked up 53, while Sherling passed for 98 yards and two touchdowns.

CHHS is off until Sept. 18, when they will host Andalusia in another Class 5A, Region 2 matchup.

In its biggest one-day jump, Troy University reported 40 new cases of COVID-19 among students at its Troy campus. The... read more