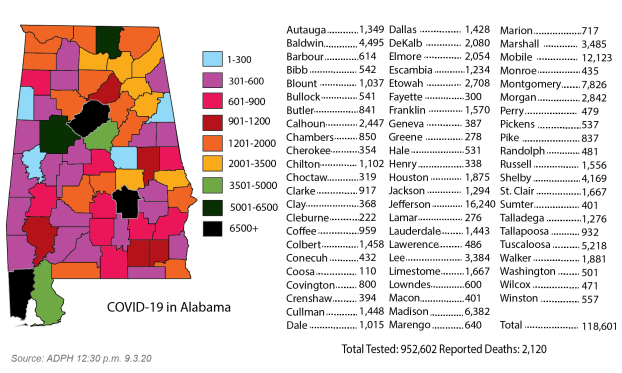 In its biggest one-day jump, Troy University reported 40 new cases of COVID-19 among students at its Troy campus.

The self-reported cases included 26 among off campus students, seven at Trojan Village; four at Newman Hall; one at Alpha Tau Omega; one at Rushing Hall; and one at Shackleford Hall.

The spikes on campus echo those seen around the state on other campuses and are part of the reason state health officials are worried about the worsening of the virus in Alabama as Labor Day approaches.

Secondary schools, college classes and high school football all resumed statewide around the same time last month, so health officials said it’s unclear exactly what is causing an uptick in COVID-19, the illness caused by the virus.

“I am concerned that we are seeing some upward trends over the past week,” Dr. Scott Harris, the head of the Alabama Department of Public Health, told The Associated Press on Thursday.

But the trend — coming as thousands of people will go to beaches, lakes and backyard cookouts for the holiday — has experts worried any increase in cases could be worse than the one which followed the July 4 holiday. They are urging people to wear face masks and keep their distance from others.

“We really don’t want Labor Day to be a replay of Independence Day or Memorial Day. We don’t want September to look like July looked because I just don’t know if our health care system would be able to tolerate that,” said Harris.

More than 128,000 people have tested positive for the virus in Alabama since the pandemic began, and about 2,200 have died.

In Pike County, 837 have people have tested positive since March with seven confirmed deaths.

The rolling average of daily new cases has increased about 34% over the last two weeks based on probable and confirmed new cases, and Alabama now ranks fourth nationally per capita with 343 new cases for every 100,000 people, according to researchers from Johns Hopkins University.

While the pandemic has eased across most of the Sun Belt and Alabama’s situation improved after a statewide mask order, Alabama is now the only state in the region where new deaths, new cases and the percentage of virus tests coming back positive are rising.

Despite that, venues including a new minor league baseball park near Huntsville are planning events Saturday to coincide with The Kentucky Derby, which will be run without fans in the stands at Churchill Downs in Louisville. The OWA amusement park in Foley near the coast is holding a car show, fireworks and other events over the holiday.

To kick off the holiday period, the University of Alabama at Birmingham was set to play host to Central Arkansas in a game scheduled for Thursday night in Birmingham.

At each place, organizers said they would encourage people to wear masks and stay 6 feet (2 meters) away from others. Similar requests have been ignored at other recent events including some high school games, where stands were packed and few people wore masks despite a state requirement for face coverings in public.

Hospitalizations haven’t risen in the state despite the recent increase in cases, indicating many of those testing positive are children or young adults who are generally less prone to develop serious cases of COVID-19, said Dr. Don Williamson, president of the Alabama Hospital Association.

The question is whether the state can get through another holiday and the reopening of schools without a big spike that fills intensive care beds in hospitals as flu season begins.

“If we were to see the same effect from Labor Day we would be in worse shape than we were after July 4,” said Williamson.

After months of summer workouts and hot days on the practice field, the Goshen Eagles will finally see some game... read more