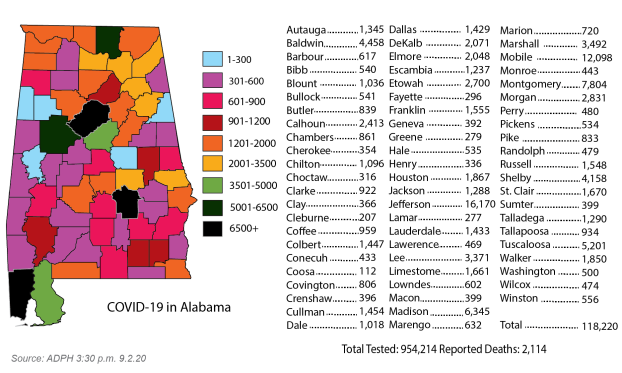 Troy University has reported more than 200 COVID-19 cases among students since Aug. 3, when the university began publicly reporting data.

The university updates its self-reported case totals each weekday at 5 p.m. In the week ending Aug. 24, the university reported 73 cases among students, more than doubling the 30 cases reported the prior week.

In three days this week, the university has reported a total of 60 new student cases, including 15 new cases on Wednesday: 13 off campus, one at Cowart and one at Rushing Hall.

The Alabama Department of Public Health only reported 86 new cases statewide in its 10 a.m. Wednesday update, bringing the total number of cases in the state to 118,220 with  2,217 confirmed deaths and 51,154 presumed recoveries. More than 11,450 cases have been confirmed in the last 14 days.

The Pike County case total according to ADPH is 833 with seven confirmed deaths and 164 probable cases. Of those cases, 78 have been confirmed in the last 14 days.

Buffets back? Not quite yet, say local restaurant owners