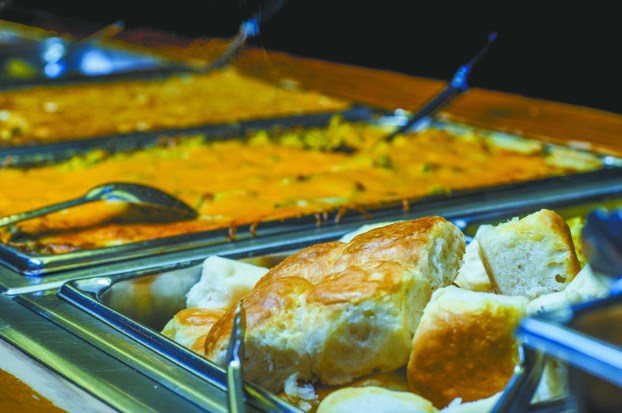 Buffets back? Not quite yet, say local restaurant owners

Just in time for the Labor Day Weekend, Alabama Governor Kay Ivey gave the green light to self-serve buffets across the state.

However, those who frequent Pike County’s popular buffets, Julia’s and Sisters, are going to have to wait a while longer.

For sisters, Geraldine Golden and Pat Rodgers, there was no thinking it over.

“We didn’t even consider opening our buffet right now,” Golden said. “We want our customers to feel safe and the way we are serving them now – from the menu – they feel safe. We’ve had a lot of our regular customers say they like ordering from the menu better than the buffet.”

Golden said, with the guidelines that would have to be followed, opening the buffet would not be cost effective.

“An employee would have to monitor each station- the buffet line, the salad bar and the dessert bar – to make sure people stayed six feet apart,” Golden said. “Customers would have to sanitize their hands before using the utensils.

“Our customers are fine with ordering from the menu and none of them have said they leave hungry. Down the road, it might be that we’ll open the buffet again but right now we’ll keep doing what we are doing.”

However, Golden did say, at the customers’ request, Sisters will open on Sunday, Sept. 13 and serve cafeteria style.

“People have asked when we were going to open on Sundays so we’re going to try this and see how it works,” Golden said. “But, it’s not time for Sisters buffet to open.”

And, neither is it the time to bring back the buffet at Julia’s said owners, Bo and Natalie Lankford.

When the governor closed buffets in mid-March, the Lankfords didn’t waste any time in rearranging their restaurant from self-serve buffet to cafeteria style.

Lankford said he and his wife have found there are advantages to serving their customers cafeteria style.

“We have more items on the bar and the pans are smaller so the food moves faster and comes out fresh from the kitchen,” he said. “We have been pleased with how cafeteria style has worked out and it’s keeping us in business.”

Lankford said, even if re-opening the buffet would bring in more customers, it would still would be too labor intensive.

“Manning the different stations and keeping people six feet apart … it just wouldn’t be worth it for us,” Lankford said. “For now, we’ll keep doing what we’re doing – offering good food and a safe place to come, sit down and enjoy it.”

As of 5 p.m. Monday, August 31 a revised “Safer at Home Order” allowed all buffets, salad bars and self-serve drink stations to reopen as long as there is an employee present whose duties include ensuring that six-feet of separation exists among customers. In addition, that employee will also be charged with providing hand sanitizer and will encourage patrons to apply it before using the buffet, salad bar or self-serve drink station

Come experience ‘Art by the Tracks’

With the ringing of the school bells, comes additional opportunities for learning, exploration and creativity. And, there’s no better place... read more