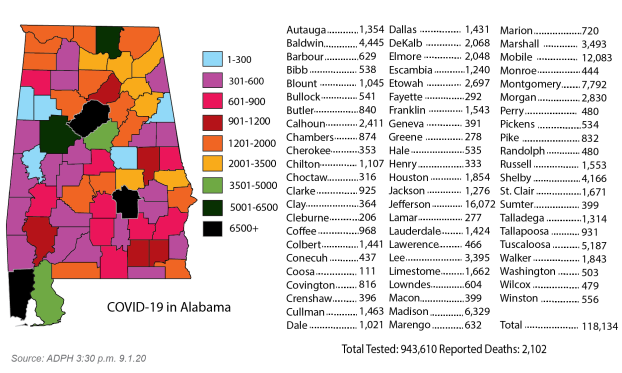 Another eight on-campus cases of COVID-19 and seven off-campus were reported Tuesday at Troy University.

The new cases bring the total cases reported at the university to more than 175 since dorms reopened to students on Aug. 8.

Tuesday’s self-reported cases include four at Rushing Hall; two at Trojan Village; one at Newman Hall 200; and one at Hamil.

To date, the university has identified clusters of cases at both the Delta Chi and Sigma Chi fraternity houses, closing both for cleaning. The university also suspended all fraternity activity until after Labor Day.

The university cases are not included in the Alabama Department of Public Health case count for Pike County unless the student is a permanent resident of Pike County.

The ADPH reported another eight cases in Pike County as of 10 a.m. Tuesday, bringing the overall total reported since tracking began in March to 832, with seven confirmed deaths.

Auburn University also updated its number of COVID-19 cases on Tuesday, reporting 517 new cases during the week of Aug. 22-28, doubling its numbers from the week before.

Troy Athletics In a flurry of moves Tuesday, ESPN and the Sun Belt Conference announced that Troy’s home opener against... read more