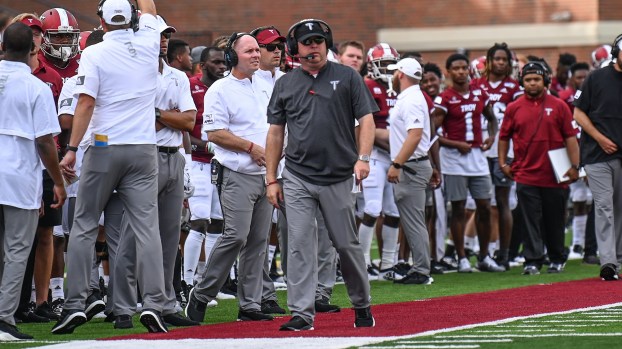 In a flurry of moves Tuesday, ESPN and the Sun Belt Conference announced that Troy’s home opener against Texas State has been moved to Saturday, Oct. 10, from its previously scheduled Thursday date, while also announcing kickoff times and TV networks for Troy’s road games at Middle Tennessee and BYU.

The Troy and Texas State matchup was originally slotted for Sun Belt’s traditional Thursday night ESPNU broadcast on Oct. 8. However, the move to Saturday puts the game in position for broadcast on ESPN or ESPN2; a kick time and TV network will be announced closer to gameday.

Troy’s season opener at Middle Tennessee on Sept. 19 is now slated for a 3 p.m. kickoff with ESPNU broadcasting the game. The following week will see the Trojans travel west to take on BYU on ESPN with kickoff scheduled for 9:15 p.m.

The Vet will operate at a significantly reduced capacity for the 2020 season and fans wanting to guarantee a seat for all six home games are encouraged to purchase season tickets by visiting TroyTrojans.com/tickets.