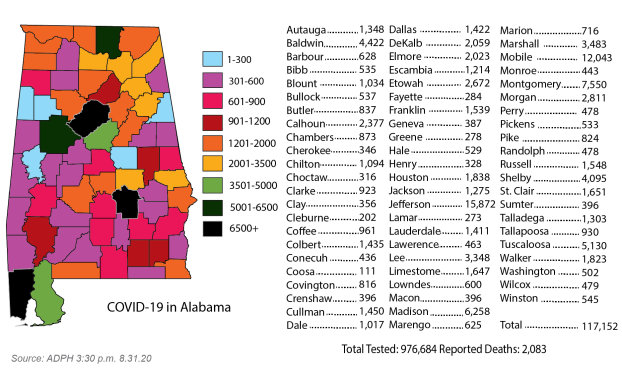 Troy University reported 29 new cases of COVID-19 on Monday, including eight on campus.

The university reported 21 off-campus cases; four at Trojan Village; two at Newman Hall 200; one at Rushing Hall; and one at Sigma Chi Fraternity.

To date, the university has reported nearly 160 cases of COVID-19 since students began returning to campus on Aug. 8.

The university last week suspected activities for all fraternities until after Labor Day due to clusters at both the Delta Chi Fraternity and Sigma Chi Fraternity. The university defines a cluster as five or more cases of students living in close proximity, such as a fraternity house or the same hall of a dormitory. The fraternity cases included both on-campus residents and fraternity members living off campus.

The students are being quarantined off campus while the fraternity houses are cleaned and sanitized, the university said last week.

Herbert Reeves, dean of students, said last week that the “vast majority” of the students diagnosed with COVID-19 were asymptomatic.

In addition to the Troy University cases, Pike County’s case count increased by three on Monday, bringing the total number of cases confirmed in Pike County since tracking began in March to 824 with seven confirmed deaths.

Alabama’s total climbed to 117,52 on Monday, with 2,083 confirmed deaths. More than 48,000 are presumed recovered and fewer than 970 remained hospitalized on Monday, according to the Alabama Department of Public Health.

The Pike Liberal Arts Patriots welcomed in plenty of new faces in the offseason, many of whom made a good... read more