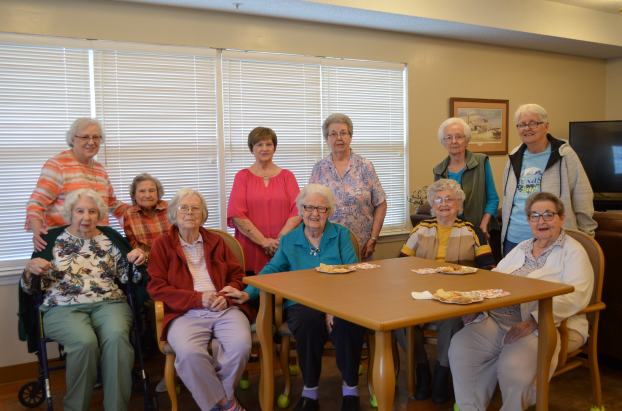 When Juanita Holmes Bush left Pike County for Colorado in March, she did so with the excited anticipation of spending time with her two daughters and their families. However, she knew, in leaving, she would miss her son and his wife, Ellis and Becky Bush and her daughter, Gail Bush, her friends at Nobel Manor and her friends throughout the city and county. Holmes left with the assurance that she was making the right decision at that time in her life.

Juanita Holmes died on August 28, 2020 in Colorado Springs in the loving care of 12 members of her family.

Dale Law, owner of Noble Manor, where Bush was a resident prior to her move to Colorado, said Bush lived a life of joy and brought joy to all those around her.
“Juanita was full of life and joy,” Law said. “I’ve never known anyone who loved life more than Juanita and who brought more joy into the lives of others. She was a very special lady.”

Law said the residents of Nobel Manor bond into one big family and Bush was a bonding agent.

“Juanita was outgoing and she brought others close to her,” Law said. “She genuinely cared about others. She kept in touch with family and friends through Facebook and was always networking, staying in touch.”
Law said Juanita Bush was a true pastor’s wife.
“I don’t know of anyone who touched more lives here in Pike County than Juanita and Ellis Sr. touched through their ministry,” Law said.  “Juanita touch lives in so many ways. She could fine joy in the smallest of things. She loved nature. She took a couple of the river rocks from our rose beds and put them on the window sill of her room. She found joy in something as ordinary as a rock.

“We at Noble Manor want Juanita’s family to know how much we loved her and want to express our deepest sympathies at their loss.”

Joan Word was a close friend of Bush and served with her as a member of the Troy Arts Council Auxiliary.

“Juanita was very interested in and appreciative of all the arts,” Word said. “She played the piano beautifully. She and Ellis enjoyed art and had really nice paintings in their home.

“Juanita enjoyed the arts but she loved people and everyone who knew her loved her. She had a warm, friendly smile that brought you close to her.

“I don’t know of anyone who knew Juanita that didn’t love her. I will always remember her sweet and caring spirit.

Bush and Lyra Crapps were in the Troy Music Study Club together but they were friends before that.

“It was our friendship that kept us close through the years,” Crapps said.

“Juanita had such a sweet personality and she was so kind, always. People were drawn to her and she liked being around people. Many of her friends shared her love of music and art.”

“And, we will miss her dearly,” Crapps said. “She brought sunshine into our lives and we will always remember her and love her.”

Juanita Holmes Bush was born and raised in Pike County in the Antioch Community. She was the daughter of

Roy and Irene Holmes, both long term residents of Pike County and the Brundidge community.

She had two siblings, David Holmes and Betty Holmes Botts.

She attended Pike County High School and was voted the first Miss Brundidge in 1949.

Bush was always a farm girl and was active in 4-H and enjoyed raising cattle, but really didn’t like feeding or “ringing” the chickens.

She married Ellis Bush, also from Pike County, in August 1950 and traveled with him throughout Southeast Alabama as he led revivals and was a “quarter-time” pastor at several small churches.

Juanita served with her husband in many churches throughout her life but especially enjoyed the “retirement years” where they serve together at Bush Memorial, First Baptist and Calvary Baptist here in Troy.

In addition to the many church involvements, Juanita Bush also enjoyed so many activities here in Troy including The Troy Music Study Club, The Daughters of the American Revolution, attending Troy University Football games and The Troy Arts Council.

The Brundidge Municipal Election on Tuesday closed with only two of the six races set in stone. Incumbent District 4... read more