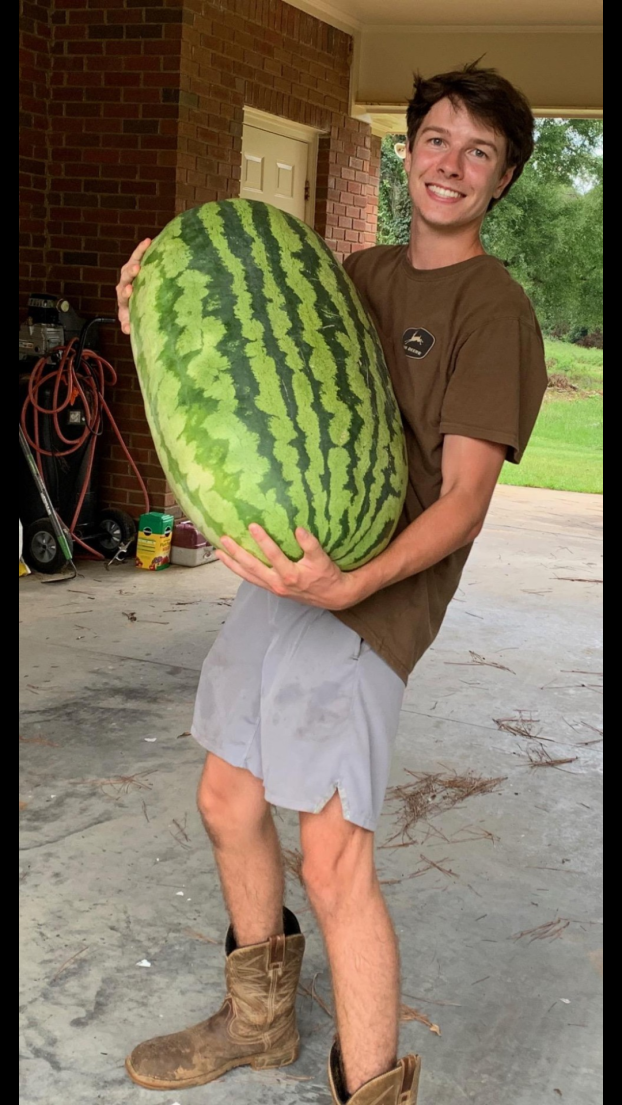 Curtis turns a hobby into a thriving business with watermelons

Jackson Curtis, a civil engineering student at Auburn, was in class but his thoughts turned to watermelons.

“I was needing to find a way to make money but I wanted to do something that I enjoyed,” Jackson said. “I had worked  different summer jobs during high school, some inside and others outside.

“I’d always enjoyed growing stuff. When I was little, my dad, John Curtis, would have a big garden and he would block  off a section for me. I’d grow things like squash, tomatoes and eggplants, so I knew I wanted to work outside and,  preferably, be my own boss.”

That seemed like a rather self-limiting job preference but Jackson had an idea and a plan.

When he was about 10 years old, his dad planted watermelons in field in front of their house. Jackson was   as involved as a youngster could be. But, he remembered they picked the melons and sold them by the truckload  to a man who operated a fruit stand.

A couple of years later and, then for several following years, 2014 to 2016, father and son grew melons at Jackson’s granddaddy,  Bert Cutis’ farm in Mossy Grove and were very successful.

The sisters at Sisters Restaurant gave Jackson permission to sell the  melons in their parking lot and, again, he was successful business man.

The busyness of 2017 brought a halt to the father-son watermelon operation. So, it was not until that day in an Auburn classroom  that Jackson began to formulate a moneymaking, self-employment plan to grow and sell watermelons.

That was August 2019, and, in February 2020, Jackson began putting his business plan into action.

Bert Curtis loaned his grandson the use of a field, a tractor and some implements. Jackson turned the field over with a  bottom plow.

“Then, I had to wait for a good rain to kind of set the dirt back into place so the tractor would run across it smoothly,”  Jackson said. “Then, over the next three weeks, I smoothed the soil out several times with the field cultivator.”

On March 7, 2020, Jackson planted his first watermelons in cups.

“Planting the watermelons in cups allows you to avoid the danger of frost killing the plants because you can move them  inside it there’s frost,” he said. “Planting in cups is time consuming because you have to touch the plants several times  before putting them in ground. But it’s worth the time because it allows you to have watermelons ready to go to market before the Fourth of July and that’s when they bring the most money.”

At about the same time Jackson planted the “cupped” melons he planted several rows of seeds — Jubilee, Crimson  Sweet and Carolina Cross, in the ground.

“I came back a week later and planted several more rows of melons,” Jackson said. “It’s always good to stagger your plantings  so your melons won’t all ripen at the same time and you’ll have melons consistently throughout the summer.”

But, Jackson couldn’t just sit around and wait for his watermelons to ripen, he had to weed and hoe and fences to build.

“When the watermelon plants began to grow long vines and put on small melons, I had to put up an electric fence to  keep out the deer,” Jackson said. “Some fence was already up around about have the field but I had to put up enough  fence so that it would stretch around the entire field. That took two solid days of hard working. I had a virtually deer proof  five-strand electric fence with one staggered wire that was supposed to mess with a deer’s depth perception.”

Jackson, laughingly, added that over the course of the entire summer, he only found one set deer tracks.

Once the melons were growing, the fence was hot and the weeds were under control, all Jackson had to do was fertilize  the melons and wait for them to get ripe. While he waited, he cut grass and took calculus 2 online.

The week before the Fourth of July, Jackson picked his first watermelons.

“They were big, sweet and good looking,” he said. “I walked the rows, cut the melons off the vine and loaded them in  the truck,” he said. “We took the melons to Union Springs and sold out much faster than I expected.”

Over the next six weeks, Jackson hauled out and sold eight truckloads of melons.

“They were all bigger than you can get in a store,” he said. “I had several loads where my average watermelon  weighed more than 35 pounds. My biggest was a Carolina Cross variety that weighed in at 91 pounds.

“The sandy soil around Mossy Grove is perfect for growing watermelons because it drains well and, too, we had a   good rain pattern throughout the spring and into June.”

As the summer went on, the days got hotter and dryer and the melons got sweeter.

Jackson hauled out load after load. He sold his melons at gas stations, parking lots, farmers’ markets and Facebook  Marketplace.

“I sold some melons by the truckload to those who wanted to buy in bulk,” he said.

“According to a rough estimate, I grew  about 12,000 pounds of melons this summer. It took a lot of hard work. I never realized how much when I was helping my dad and granddad.”

Jackson admitted that he had the advantage, if you can call it that, of time off from college due to the coronavirus that  allowed him more time in the watermelon field. Hopefully, by planting time in 2021, the virus will be somewhat under  control, he said.

But, what better summer job can a young man have than one that allows him to make a little money while  working outdoors and being his own boss.

Troy University reported 13 additional cases of COVID-19 on Thursday among students and faculty members. The cases self-reported to the... read more