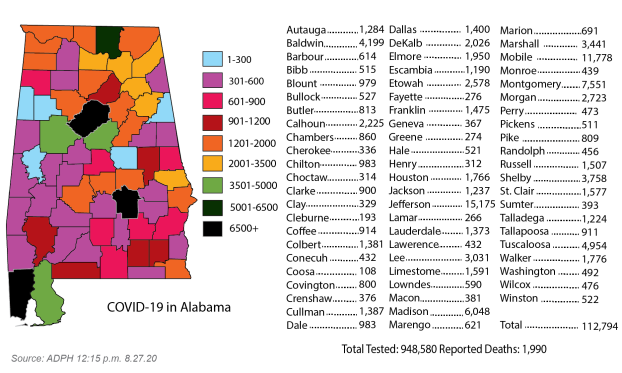 The cases self-reported to the university include six off-campus students; two at Rushing Hall; one at Newman Hall; one at Sigma Chi Fraternity; and one at Trojan Village. .Employees at Hawkins Hall and the Math and Science Complex also reported cases.

The university has reported more than 115 student cases since students returned to campus on Aug. 8.

The university on Wednesday suspended all fraternity activities, including recruitment, until after Labor Day after 14 cases were reported at the Delta Chi fraternity house. The cases include students living on-campus in the house as well as off campus.

The university is closing the house for cleaning and sanitation, and anyone testing positive or having exposure are quarantining at designated facilities on campus or returning home.

The university defines a cluster as five or more students living in close proximity, such as the same end of a hallway in a residence hall. At least five cases have also been self-reported at Sigma Chi Fraternity, Rushing Hall and Trojan Village.

Pike County reported an additional seven cases, bringing the total to 809 with seven confirmed deaths since tracking began in March. Statewide cases were 112,794 on Thursday, with 1,990 confirmed deaths.

Pike County is averaging fewer than nine new coronavirus cases per day, which equates to 2.7 cases per 10,000 people, the sixth highest rate in Alabama.

The six-week extension of Alabama’s mask mandate met with support and criticism on Thursday, but local health officials are hoping... read more