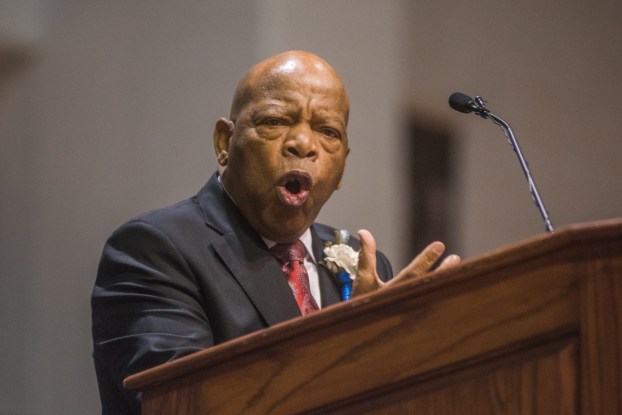 Former U.S. Congressman John Lewis, a civil rights icon and Pike County native, will be honored at Troy University after the Board of Trustees voted unanimously on Wednesday to rename the prominent Bibb-Graves Hall in honor of Lewis.

Troy to rename Bibb-Graves in honor of Lewis

The Troy University Board of Trustees voted today to rename historic Bibb Graves Hall at the Troy, Alabama, campus in honor of U.S. Congressman and Civil Rights leader John Lewis.

The name change is effective immediately, and the building will now bear the name John Robert Lewis Hall.

“John Lewis is a towering figure in American history, whose leadership and advocacy for non-violent change have left a lasting legacy for us all,” said Dr. Jack Hawkins Jr., Chancellor. “Although Rep. Lewis once sought admission to then Troy State College as a young man and was sadly ignored, I am pleased to say that he became a friend to the University. He visited our campuses several times and was a profound influence on many of us. I am grateful to the Board of Trustees for choosing to honor this Pike County native with this name change.”

Lewis was born the son of sharecroppers on February 21, 1940, outside of Troy, Alabama. He grew up on his family’s farm and attended segregated public schools in Pike County.  As a young boy, he was inspired by the activism surrounding the Montgomery Bus Boycott and the words of the Rev. Martin Luther King Jr., which he heard on radio broadcasts.  In those pivotal moments, he made a decision to become a part of the Civil Rights Movement and he rapidly emerged as a leader in the vanguard of progressive social movements and the human rights struggle in the United States.

“I am proud of my fellow Board members for unanimously approving the resolution to honor Congressman John Lewis,” said Gibson Vance, President Pro Tempore of the TROY Board of Trustees. “John Lewis’ character, spirit and selflessness reflect the values we strive to embrace every day at Troy University.”

Troy University previously honored Lewis with an honorary doctorate in 1989 and the Hall-Waters Prize in 2006 for his memoir “Walking with the Wind.”  He was also the keynote speaker in 2018 during the annual Leadership Conference Celebrating African American History Month, which has since been renamed the Congressman John Lewis Leadership Conference.

“Naming this building in honor of Congressman Lewis is a great testament to the legacy of a man whose blood, sweat and tears continue to make Alabama and America a better place for all people,” said Lamar P. Higgins, Vice President Pro-Tempore.

Higgins referenced the changes that have taken place at the university over the past 40 years, saying “I can’t think of a greater honor we could bestow on someone whose application was not even accepted to Troy State College in 2020 than to put his name on the most prominent building …

“It speaks to the changes taking place at the university.”

Planning is under way for a ceremony to dedicate John Robert Lewis Hall, with details to be announced soon.

With 22 candidates vying for the mayor’s seat and the five council seats in Brundidge, the situation was primed for... read more