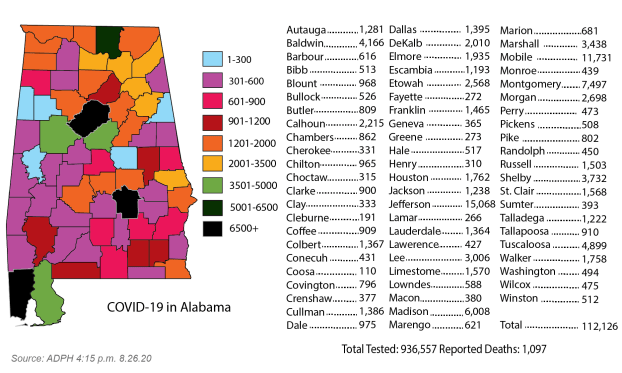 Troy University is suspending all fraternity activities, including recruitment, until after Labor Day after a cluster of COVID-19 cases developed at one fraternity house.

“Troy University officials learned late Tuesday that additional members of the Delta Chi fraternity have tested positive for COVID-19 coronavirus,” the university said in a statement late Wednesday. “The first cases among residents of the fraternity house were reported by the university last week.”

The university is closing the house for cleaning and sanitation, and anyone testing positive or having exposure are quarantining at designated facilities on campus or returning home.

The suspension comes as Troy University reported another 29 cases of COVID-19 on Wednesday, bringing the total reported to 102 since students returned on Aug. 10. Wednesday’s report included additional two cases at Sigma Chi Fraternity and one Lambda Chi fraternity, as well as two at Trojan Village and 19 off campus students.

No others are considered clusters according to the university definition, which states that a cluster is five or more students living in close proximity, such as the same end of a hallway in a residence hall.

“The university continues to monitor the number of cases on campus and will take all necessary steps to ensure the health and safety of the campus community,” the statement said.

Overall, the state added 1,172 overnight, reflecting likely delays in reporting on Tuesday. Alabama’s total stands at 112,126 cases with 1,965 deaths and 1,097 current hospitalizations. The ADPH estimates more than 44,680 people have recovered since tracking began in March.

State health officials have expressed concern about increasing spread of COVID-19 on college campuses. On Monday, the University of Alabama reported more than 530 cases of COVID-19 on campus since the fall semester began. The university issued a 14-day moratorium on student gatherings and on Tuesday the Tuscaloosa mayor ordered bars closed for two weeks.

In Auburn, the popular Southeastern bar announced Wednesday it was voluntarily shutting down in an effort to contain the spread of COVID-19.

The Troy University Board of Trustees voted today to rename historic Bibb Graves Hall at the Troy, Alabama, campus in honor of... read more