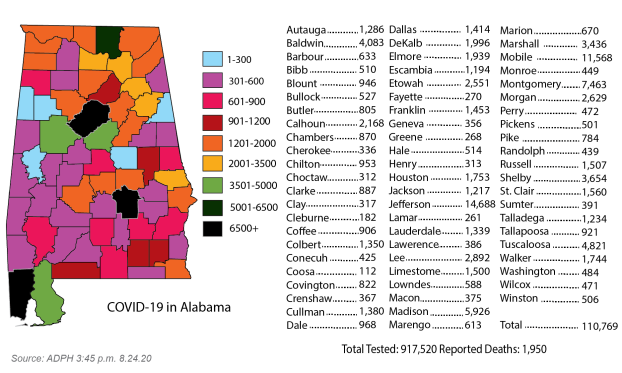 Troy University added nine cases of COVID-19 on Monday, according to its self-reported updated.

The new cases include one on campus students and eight off campus students in Troy. The reports bring the total number of cases to 74 since students returned Aug. 10. Six cases have been reported at Rushing Hall; three at Newman; three at Trojan Village; three at Delta Chi Fraternity; one at Cowart Hall; and one at Farmhouse Fraternity.

Pike County’s total cases climbed to 784 on Monday, as the state total rose to 110,769. Only 675 new cases were reported statewide on Monday, continuing a trend of declining daily numbers.

The reports come on the same day leaders at the University of Alabama and City of Tuscaloosa shut down bars and bar service in restaurants for two weeks in an effort to curtail the potential spread of the virus among college students.

The mayor of Tuscaloosa announced Monday that the city is closing bars for the next two weeks after University of Alabama officials described an “unacceptable” rise in COVID-19 cases that could derail plans to continue the semester on campus.

Maddox said university officials requested the actions, adding an unchecked spread of the virus threatens both the health care system and the local economy if students are sent home for the semester to do remote learning.

“The truth is that fall in Tuscaloosa is in serious jeopardy,” Maddox said.

The university did not immediately release case numbers, but school officials said there has been a rapid rise in cases, particularly among fraternities and sororities. The university on Friday had announced a moratorium on student gatherings both on and off campus.

“Although are initial re-entry test was encouraging, the rise in COVID cases that we’ve seen in recent days is unacceptable and if unchecked threatens our ability to complete the semester on campus,” University of Alabama President Stuart Bell said at the news conference.

“During that time, we encountered many students who have been exposed since returning to campus, particularly in the Greek system,” Friend said.

While the daily average of new COVID-19 cases has been trending downward statewide, school officials have expressed concern about images of large crowds waiting outside off-campus bars.

The university on Friday announced a 14-day moratorium on all in-person student events outside of classroom instruction. Social gatherings are prohibited both on and off campus and the common areas of dormitories and fraternity and sorority houses are closed, according to the new guidelines. Visitors are not being allowed in dormitories and sorority and fraternity houses.

Bell wrote that violations of health and safety protocols, both on and off campus, are subject to harsh disciplinary action, up to and including suspension from the university.

“They have made tough decisions, and I appreciate Mayor Walt Maddox and The University of Alabama leadership for tackling a serious problem as quickly as possible,” Ivey said.

Despite a few glitches with technology and traffic issues, students in the Troy City and Pike County schools returned to... read more