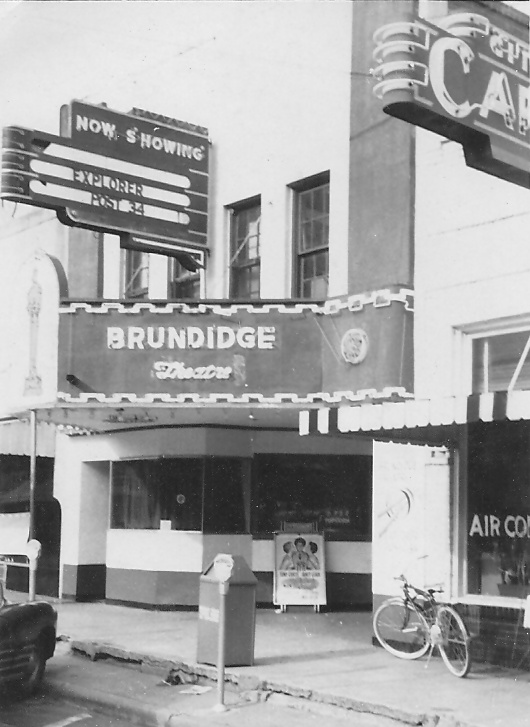 Belcher might not remember the year exactly but he remembers the smell of hot, popping corn, the tingly taste of a “co-cola” and the sound clips from an old movie projector.

The hometown Brundidge boy was a member of Explorer Post 34 back when picture shows were beginning to take a backseat to something tagged television and a gadget called a cassette.

“At that time, the Brundidge Theater had been shut down for a couple of years,” Belcher said. “Tommy McCormick was the leader of our Explorer Post and his dad, Mac, was experienced, in some way, with theater operations. They had the idea that our Explorer Post could take the Brundidge Theater as a community service project. We could open the theater to the public on weekends. Operating the picture show would be a lot of fun for us and would be a great learning experience for junior and senior high school boys and something fun and entertaining for the community.”

At that time, Explorer Post 34 was meeting at Brundidge Banking Company where Harold Walker was an official. Walker was very supportive of the idea and recognized it as an innovative community service project for the Explorers.

“Mr. Walker helped our post with the legal work that was necessary for us to rent the theater and with a company that distributed motion pictures,” Belcher said. It took a lot of work to get the theater ready to open but it was a learning experience and we had fun doing it.”

The responsibilities were divided among the Explorers.

“We had a full concession stand so it took two guys to work it,” Belcher said. “We had Coca-Colas, popcorn, Hershey bars and other kinds of candy. We stayed busy before, during and after the picture show. One guy worked the ticket widow; one was the entertainment manager, one was the floor manager or usher and a couple of us helped the man who ran the projector. I was in charge of the sound.”

Other members of the Explorer Post had odd jobs and some just hung around the movie theater.

“The movies arrived by truck or bus on Wednesday for the Friday, Saturday and Sunday shows,” Belcher said. “On Wednesday nights, we – the Explorers – could have private showings and, sometimes, we had dates to come.”

Belcher added, laughing that Explorer Post 34 was not a first-run movie theater but it featured movies for all ages.

“On Friday, we usually had a drama or a who-dun-it.  The Saturday movies were the most popular so we had really good crowds.  We most always had a cowboy movie and sometimes it was a double feature.  On Sundays, we usually had a drama or a musical.  At every show, we had the previews and a cartoon.  Everybody liked the cartoons. We had good crowds most of the time. We didn’t make a big profit but we weren’t doing it for the money.”

The first movie that Explorer Post 34 showed at the Brundidge Theater was ‘The Mummy.”

“It was a real scary movie,” Belcher said. “‘The Mummy was very popular back then and can still be seen on late-night television.

If the projector had a glitch and the movie stopped, there would be a collective hum of disappointment or aggravation throughout the theater.

And, it wasn’t that way just in Brundidge.

Once the Explorer Post 34 Theater ran out of tickets but got a good deal on tickets stamped Clayton Theater because that nearby theater had closed, it doors,” Belcher said.

Not long after, in 1963, Explorer Post 34 closed the doors of the Brundidge Theater.

“We had a lot of fun and learned various real-life experiences,” Belcher said. “We learned to keep books, to place orders, to manage money, to deal with people across the counter; we learned to sweep and clean up and we gained greater appreciation for our older patrons.”

Belcher, who now lives in Fort Walton, dusted off his memories of the Explorer Post 34 Theater and made a donation of one of the heavy-weight reels and other “picture show” memorabilia to the Tupper Lightfoot Memorial Library in Brundidge.

“The movie theater is part of the city’s history,” he said. It opened in the 1940s and during the 1950s it was managed by Ralph Johnston and Foy Ingram. Mr. Tupper Lightfoot, for whom the library is named, once gave me a radio. He was an extremely generous, loving and patient man, particularly with children. I will never forget him. It’s good to look back and remember, people and places.

The Johnson Center for the Arts hosted an artists’ reception and Art Talk for local artist Charles Adams and Huntsville... read more