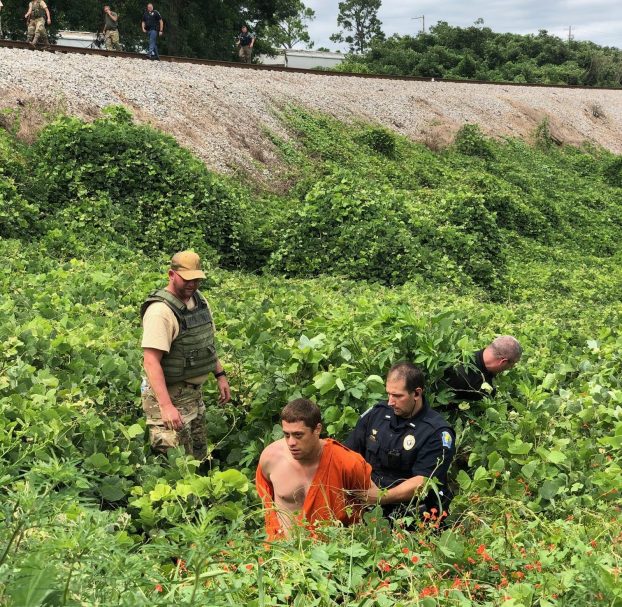 Troy Police capture jail escapee Jackson Lamar Harris after he hid in a wooded area behind the Troy Utilities department. Harris escaped from the city jail about 10:20 Thursday morning and was captured less than five hours later.

After hiding in a kudzu patch for nearly five hours, a Troy City Jail escapee was recaptured on Thursday afternoon.

“He was in a common area and managed to grab a set of keys, and then took off running,” Barr said.

“Officers began searching that area and set up a perimeter,” Barr said.

A massive manhunt took place, with support from the Alabama Law Enforcement Agency and its helicopter, the U.S. Marshall Service, Alabama Department of Corrections, the Pike County Sheriff’s Office and the Troy Fire Department.

“Several of those agencies were in town for something else, so it was all hands on deck,” Barr said.

After an extensive search along Three Notch Street and surrounding areas, Barr said officers determined Harris had to still be in a wooded area behind Troy Utilities between Alphonsa Byrd Drive and Wiley Street.

“We’d kept that area cordoned off because we believed he was there and we’d not received any calls from the public saying anyone had spotted him,” Barr said.

An area of trampled kudzu led officers to call in the Alabama Department of Corrections K-9 units.

“Harris was spotted and taken into custody without incident” at 3:12 p.m., Barr said.

Harris was being held in the jail for failure to complete a court-ordered substance abuse rehabilitation program. He was also charged with Escape 2nd Degree (a Class C Felony) and was transferred to the Pike County Jail with a $2,500 bond.

The Troy Trojans released their 2020 football schedule on Thursday afternoon. The schedule will feature 12 total games, six of... read more