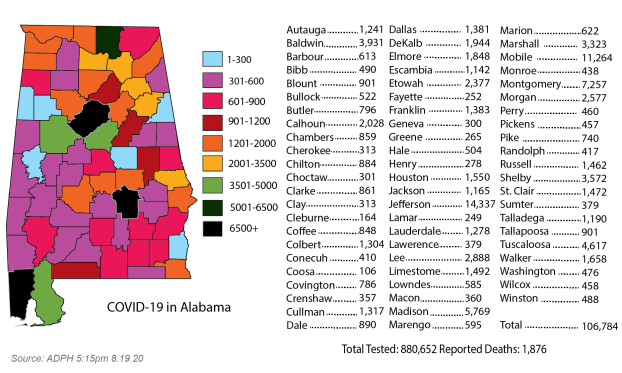 Troy University reported nine new student cases of COVID-19 on Wednesday, including two at residence halls with prior cases.

The remaining seven were among off-campus students.

The two on-campus cases were reported at Rushing Hall and Trojan Village, both of which have now had three case reported among residents. Delta Chi Fraternity has reported two cases.

The university defines a cluster of cases as five or more in one location, such as a fraternity house or the floors of a residence hall.

“Troy University identifies individual students who are positive for COVID-19 and works to isolate those students and their close contacts, thereby hoping to avoid clusters,” the university said in a statement on Tuesday. “The University defines a cluster as five or more active cases within close proximity, meaning individual floors in residence halls, or members of a student organization. Depending on the number of active cases, the University would relocate residents so that cleaning and sanitization could take place and residents could return to their original rooms.

“The goal of the University is to prevent a cluster from occurring by returning students home to quarantine. Early diagnosis and isolation is key to preventing a major outbreak. Emphasis is placed on the Trojan Strong campaign to spread education about preventing the spread of COVID-19 on the Troy Campus.”

Statewide, 969 new cases were reported with the 10 a.m. Alabama Department of Public Health update, bringing the total to 106,784 cases since tracking began in March. More than 1,198 remained hospitalized with 41,523 presumed recovered.

Jones leads the Lady Patriots into the 2020 season

The Pike Liberal Arts volleyball team rides into the 2020 season under new leadership. The Patriots open the season on... read more