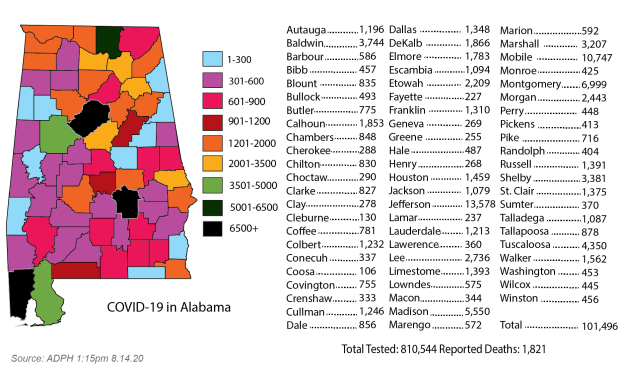 The risk factor, determined by the Alabama Department of Public Health, indicates that the number of cases per day is holding steady or increasing. It is the highest risk level assessed by the state, and only four were in the high-risk category on Friday.

As of 10 a.m. Friday, Pike County had added two additional cases for a total of 718, with seven confirmed deaths.

Troy University reported four more cases at the Troy campus, including two off-campus students, one employee and an on-campus student. It was the fourth case among students living in dorms reported this week at Troy. The university has reported 44 cases among faculty, students and staff since Aug. 1, including two at the Dothan campus and one in Montgomery.

Alabama health officials are encouraged by a decline in COVID-19 cases about a month after a state mask order took effect but cautioned that people should not abandon precautions as the state heads to Labor Day gatherings and school openings.

Harris urged people to continue taking precautions such as wearing a mask in public. “Just because numbers are getting better is not the time to suddenly put it in all in jeopardy by being unsafe,” Harris said.

Alabama Gov. Kay Ivey implemented a statewide mask order in July which health officials said may be partly responsible for the decline. “It’s always hard to know for sure but certainly we think that has played a role,” Harris said. Harris said another factor could be that the surge of cases the state saw following July 4th gatherings has ended.

Dr. Don Williamson, the former state health officer who now heads the Alabama Hospital Association, agreed the trends are encouraging. The unknown is what will happen with the return to campuses.

“There are two events that will determine what it looks like, the re-entry of individuals into both K-12 and college. And what we do on Labor Day. Those are going to decide whether it spikes back up. If new cases spike back up then absolutely hospitalizations are going to spike back up,” Williamson said.

While the number of COVID-19 patients in hospitals has dropped, he said intensive care units are remaining frustratingly full because of the long stretches that COVID-19 patients remain in hospitals. He said 89% of ICU beds are full but he hopes that number will decline before the state heads into flu season.

The state is testing college students as they return to campus. So far, less than 1% of tests have returned positive, according to numbers released by GuideSafe testing program.

“I’m pleased that numbers have been relatively low so far,” said Dr. Michael Saag, an infectious disease expert at the University of Alabama at Birmingham. But he cautioned the numbers could change and the key part is to monitor and prevent outbreaks going forward.

“I wouldn’t hang your hat right at this moment on any particular number, because every time we access a new population it could change,” he said.

The Pioneer Museum of Alabama is moving ahead with plans to host its annual Pioneer Days on October 9 and... read more