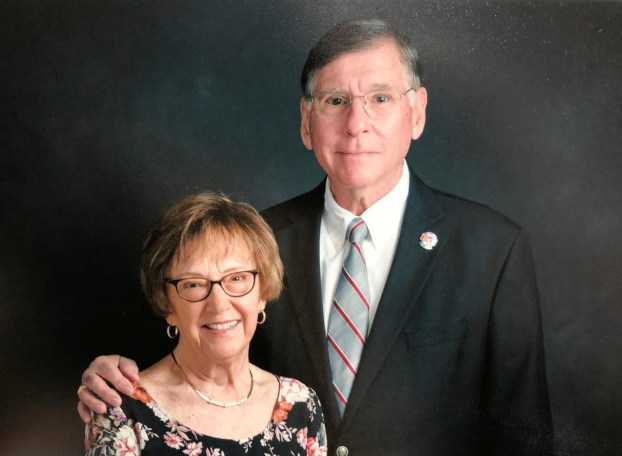 In a chemistry class at Troy State University in 1968, Jerry Williams was bitten by the love bug.

Even before he knew the name of young woman who was “surrounded by sweetness,” he knew she was the one for him.

“Out of all the girls in the class, I picked Mary Ida Wilson,” Jerry Williams said with a smile. “Sweetness was all around her.”

The perky, young woman had only to turn her head and catch a glimpse of the handsome, dark-haired young man to know he was the one, as well.

Jerry and Mary Williams admitted that it was love at first sight. But the chemistry between them is an even more special connection than it was 50 years ago.

On Sunday, August 16, 2020, Jerry and Mary Williams will celebrate their 50th wedding anniversary. Because of the restrictions of the coronavirus, they will celebrate alone. But what a celebration that will be.

“When the can is kicked down the road a bit, maybe, we’ll celebrate our 50 wonderful years together with family and friends,” Jerry said. “But, on Sunday, we’ll celebrate together. We might go to church and, for sure, we’ll look at pictures and remember all the good times. There won’t be any grand gesture. We’ll celebrate just as we have lived our daily lives together for 50 years — loving, taking care of and cherishing each other.”

There is no doubt the happy couple will look back to that day in chemistry class and to their first date at the Starlite Drive-In.

Mary will remember listening intently to the radio to hear Jerry play “her” songs on the Ozark radio station. He was juggling college and his job as the early morning and late afternoon announcer.

“I played every song I could find that had a name that included ‘Mary’ so she would know I was thinking of her,” Jerry said.

“It was on my Daddy’s birthday so that made it even more special,” Mary said.

“Mr. Wilson told me not to ask for his daughter’s hand until I could take it out of his pocket,” Jerry said, laughing. “I had no idea how deep his pocket was.”

The young couple was excitingly looking ahead to their life together but life took a devastating turn.

It was June 1970, and Jerry was working on a government project in the Camden area. He was on a barge when the propeller slung loose slicing through his left leg, nearly cutting it off and sending him into the churning, black water.

“If I had not been able to grab a rope that was swinging loose, I would have been swept under the barge and I would have drowned,” Jerry said.

In danger of his bleeding to death, Jerry was rushed to a Montgomery hospital. His parents were notified and, on the way, stopped in Troy for Mary. For the next two months, she stayed by his side as doctors worked to save young Jerry Williams’ life and then his leg.

“For a time, we weren’t sure Jerry would live and then there was doubt that his leg could be saved,” Mary said.

Although, Jerry Williams’ leg was torn apart, the valiant and perhaps innovative efforts of his doctor were successful. Even though Jerry’s leg held together, the doctors were concerned that he would not be able to walk again.

Two months after the accident, on August 16, 1970, Jerry Williams and Mary Ida Wilson were married. He was pushed down the aisle in a wheelchair.

“I enjoy saying, ‘Mary not only pushed me to it, she pushed me through it,” Jerry said laughing. “I was so grateful she wasn’t afraid to marry damaged goods.”

Those early years were demanding for the young couple. Mary was teaching school and Jerry was dealing with continuing medical issues and searching for ways not to be handicapped. He ran the register at Wilson’s Barbecue, which was owned by his wife’s parents.

And, all that time, even when his leg was in a cast, Jerry exercised the muscles in his leg. In time, he was able to stand and then take a few steps. Slowly, he began to walk again.

And, through it all, Jerry and Mary Williams were there for each other.

“I married the girl I love and I love the woman I married,” he said. “That sums it up.’

And Mary Williams loves her husband just as dearly.

“Jerry is supportive of everything I do,” she said. “If I’m involved, he’s involved. And, we love being together. We probably spend 22 hours a day together.”

Both, he and she contend that they never argue, and, certainly, a dish has never sailed across the room.

Marriage works so well, they said, “…when you keep it simple: Love deeply, talk often, laugh together, repeat.”

The couple said they have been so blessed with parents who lead by example and with great children and grandchildren, good friends and a deep and lasting love for God and each other.

“God has filled our valleys so we have lived on the mountaintop,” Jerry said. “We have been so richly blessed.”

Secretary of State John H. Merrill has extended the opportunity for any qualified voter who is concerned about contracting or... read more