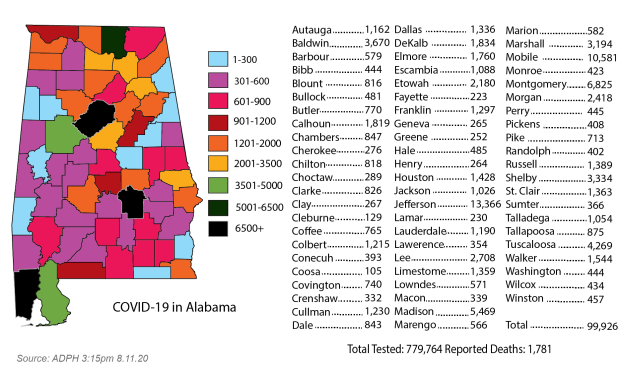 The state added 536 cases overnight Monday, bringing the total confirmed cases to 99,926 since tracking began in March with 1,781 total deaths.

According to the Alabama Department of Public Health daily update, more than 1,528 people remain hospitalized and more than 37,920 are presumed recovered. Over the last 14 days, 18,801 new cases have been confirmed.

Pike County added five cases overnight Monday, bringing the total to 713 with seven confirmed deaths. The 14-day positive rate for the county is 7.26 percent, an increase from Monday. The overall percentage positive if 13.3 percent. Troy University reported another eight cases among students on Tuesday, including one on-campus resident.

It took six months for the world to reach 10 million confirmed cases of the coronavirus. It took just over six weeks for that number to double. The worldwide count of known COVID-19 infections climbed past 20 million on Monday, with more than half of them from just three countries: the U.S., India and Brazil. The average number of new cases per day in the U.S. has declined in recent weeks but is still running high at over 54,000, versus almost 59,000 in India and nearly 44,000 in Brazil.

With season in question, Trojans express desire to play

The Big Ten Conference shook the college football world on Sunday evening when reports surfaced that they were on the... read more