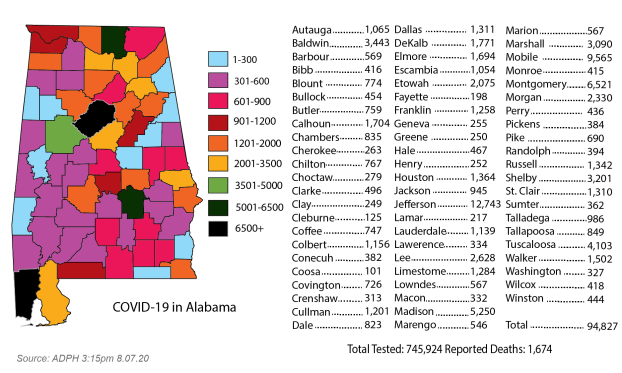 Pike County dropped to a moderate risk category on Friday, indicating a decline in the rate of new cases.

The rating was included the Alabama Department of Public Health update and reflects a downward trajectory over 7 to 13 days. The county added three new cases of COVID-19 overnight Thursday, bringing county totals to 690 cases with seven deaths.

More than 19,231 cases have been confirmed in the state during the past 14 days.

U.S. hiring slowed in July as the coronavirus outbreak worsened, and the government’s jobs report offered signs Friday that the economic damage from the pandemic could last far longer than many observers originally envisioned.

The United States added 1.8 million jobs in July, a pullback from the previous two months. At any other time, hiring at that level would be seen as a blowout gain. But after employers shed a staggering 22 million jobs in March and April, much larger increases are needed to heal the job market. The hiring of the past three months has recovered 42% of the jobs lost to the pandemic-induced recession, according to the Labor Department’s report.

Though the unemployment rate fell last month from 11.1% to 10.2%, that level still exceeds the highest rate during the 2008-2009 Great Recession.

Roughly half the job gains were in the industries hit hardest by the virus: restaurants, retail shops, bars, hotels and entertainment venues such as casinos. Those jobs have been relatively quick to return after the broadest shutdowns ended in May and June.

But economists worry that the next leg of job growth will be harder to achieve, particularly as the virus dampens confidence, leaving much of the country only partially reopened, most travel on hold and millions of employees working from home. The number of people unemployed for longer than 15 weeks jumped in July to more than 6 million, a sign many of the unemployed will have to find work at new companies or even in new occupations, a potentially lengthy process.

Constance Hunter, chief economist at accounting firm KPMG, noted that many jobs in hotels, sports stadiums and the travel industry probably will not return until a vaccine is developed.

“When are you going to be comfortable again being in an air-conditioned room with 400 people?” she asked. “There are whole parts of the economy that will remain unemployed until we have a much tighter control of this virus.”

The jobs report emerged as new infections run at about 55,000 a day. While that’s down from a peak of well over 70,000 in the second half of July, cases are rising in about half of the states, and deaths are climbing in many of them.

In other virus-related developments Friday:

— New York Gov. Andrew Cuomo announced that schools can bring children back to classrooms for the start of the school year, citing success in battling the virus in the state that once was the U.S. heart of the pandemic. The decision clears the way for schools to offer at least some days of in-person classes, alongside remote learning.

— California has surpassed 10,000 deaths from the coronavirus, making it the U.S. state with the third-highest number of deaths since the beginning of the pandemic. The figure was reported Friday by Johns Hopkins University.

— A small South Dakota town launched a huge 10-day motorcycle rally on Friday despite fears it could lead to a massive coronavirus outbreak. Organizers of the 80th Sturgis Motorcycle Rally said they were expecting 250,000 people from all over the country. South Dakota has no mask mandates, and many who arrived on Friday expressed defiance of measures meant to prevent the spread of the virus.

— Russia boasted that it’s about to become the first country to approve a COVID-19 vaccine, with mass vaccinations planned as early as October using shots that are yet to complete clinical trials. Scientists worldwide say the rush could backfire if the vaccine is neither effective nor safe.

Back in the spring, the widespread hope was that temporarily shutting down the economy would defeat the virus, after which businesses could quickly reopen and call back laid-off workers. But the resurgence of the virus in much of the country has reversed some reopenings and made it harder for many people to get back to work.

In addition to the rising number of longer-term unemployed, the proportion of Americans who are either working or looking for work slipped last month to 61.4%, down 2 percentage points from February. That suggests that many out of work see little prospect of finding a job.And the number of Americans who say their job losses are permanent was flat last month despite the rise in hiring. Cassy Menon, 36, was furloughed March 17 from her job arranging travel for university students, faculty and staff, and was originally told the layoff would last 90 days. She was initially able to keep her health insurance.