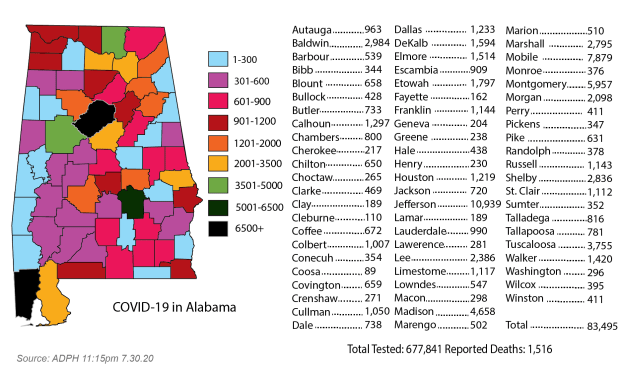 Demand for tests surging in county

According to the Alabama Department of Public Health 10 a.m. Thursday update, Pike County has reported 631 total cases with seven deaths. The state has reported 83,495 with 1,516 total deaths. More than 10,070 have been hospitalized since tracking began, with nearly 1,600 still hospitalized on Thursday. ADPH estimates 35,401 have recovered.

The ADPH estimates more than 677,840 tests have been administered statewide since tracking began in March, with more than 11,776 administered on Wednesday.

In Pike County, more than 18 percent of the overall cases have been confirmed during the past two weeks.

And the demand for testing continues to increase as Troy University students begin to return to campus and residents gear up for the return of school and fall activities. The key to effective testing lies in the scheduling.

“It depends on your symptoms or when you were exposed to someone with the virus,” Minor said. “I had someone call who was exposed yesterday and I told him ‘you’re way too early for a test.’” Minor said experts recommend a five-day wait between exposure and testing, to preclude false negatives. “But you have to isolate yourself during those five days.”

Defining exposure is important, as well. “We’re seeing a lot of household spread right now,” Minor said. “And the spread depends a lot on the length of time exposed and the close proximity without a mask …

“If you’re riding in a car across town for five minutes, you may be OK. But if you’re taking a road trip with three other people for a couple of hours, you might want to consider wearing a mask.” Alabama remains under a mask order until Aug. 31, and all students in second grade and higher will be required to wear masks to campus this fall. Colleges throughout the state will provide free, one-time testing for all students as they return to campus as well. In spite of those measures, Minor said the key to containing the spread will lie in personal responsibility: wearing a mask; maintaining social distance; isolating yourself if you feel sick; and practicing good hygiene.

“I feel like we’re a broken record,” Minor said, as she repeated calls for residents to wear masks and take safety precautions. “But I think for a lot of people, it’s not going to stick until it hits close to home – either they get sick or someone in their family gets sick.”

Minor said while most positive tests seem to be coming from the 20 to 50 year old age group, the impact of the virus is biggest on the oldest population. “They’re usually the ones being hospitalized who are the sickest,” she said. Hospitalizations at TRMC continue to ebb and flow. “We were full on Monday, but since then we’ve been able to send some people home,” Minor said.