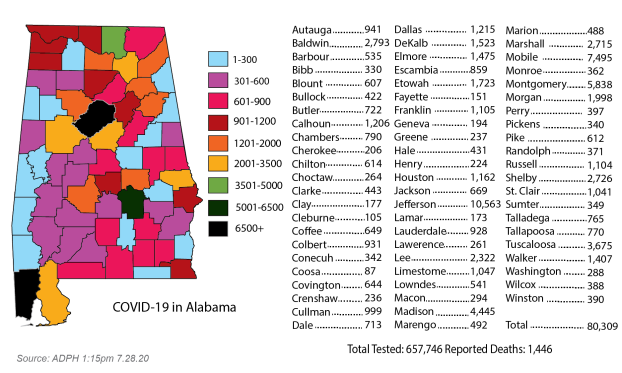 Nearly 20 percent of county cases added in past two weeks

That’s the message Troy Mayor Jason Reeves reiterated during Tuesday’s City Council meeting as he talked about COVID-19 and its impact in Pike County.

“I know people are beginning to weary and this is becoming political,” he said.

But, he said, as “we’re going into our second week with the governor’s mandatory mask decree, it’s very important people not become complacent just because a mask decree is in effect. It’s so important that we’re careful in our behavior when we’re not in public” as well as abide by the mask requirements when in public, Reeves said.

On Tuesday, Alabama added 1,180 new cases, bringing the statewide total to 80,309 since testing began with 1,446 deaths. More than 1,598 people were hospitalized across the state and more than 22,505 of those cases have been reported in the past 14 days.

In Pike County, nine new cases were reported, bringing the total to 612 with seven deaths.

“And it’s important to note that 18 percent of our cases have come within the past 14 days,” Reeves said, reiterating that the spread continues to pose a threat for Pike County.

“It’s spreading through close personal contact with folks outside of our residences … and we can’t expose people with underlying health conditions and of a certain age to this.

Statewide, hospitals are urging Ivey to extend a statewide face mask order as the state continues to see high numbers of coronavirus cases.

Ivey is expected to announce this week whether she will extend the face covering mandate and other health orders that are set to expire Friday. The current mandate, which she announced on July 15, requires anyone older than 6 to wear a mask when in public and within 6 feet (2 meters) of someone who’s not a relative.

The current face covering mandate, which makes exceptions for people who have certain medical conditions, are exercising or performing certain types of jobs, is set to expire before most public schools reopen. State Health Officer Scott Harris said previously that it would take two, but preferably three weeks, to judge if the mandate was making a difference in transmission.

He said the state in recent days has seen a slight decrease in the number of cases, but the state does not need to abandon the mask order. COVID-19 patients tend to stay in the hospital a long time. Williamson said as of Tuesday that 90% of the state’s intensive care beds were full, the highest number since the pandemic began.

“We have to continue until the disease is at a very low level and 1,100 (cases per day) is not a low level,” Williamson said. “If you do away with the mask order, more people get infected and we head right back up.”

The Pike County Board of Education approved several personnel actions at its Monday board meeting. The board: Accepted the retirement... read more