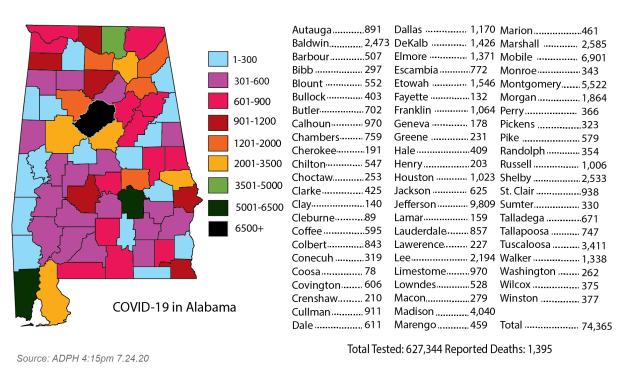 Pike County dropped to a moderate risk category on Friday, according to the Alabama Department of Public Health.

With its weekly update of the COVID-19 risk indicator dashboard for Alabama counties, the ADPH determined that Pike County’s risk had been reduced. The moderate designation indicates a county is in a downward trajectory of infection rates, for at least 7 to 13 days.

However, the data used for the risk evaluation is based on the cases tracked through the prior Saturday.

The ADPH reported seven new cases of COVID-19 in Pike County, bringing the county’s totals to 579 with seven deaths since tracking began in March. According to bamatracker.com data, Pike County’s 14-day percent of positive results increased to 14.69 percent, with the county average eight new cases per day over the past 14 days.

Also on Friday, Alabama Superintendent of Education Eric Mackey on Friday estimated that up to half of the state’s public school students will be attending classes remotely in the fall because of the COVID-19 pandemic. Mackey said more than a quarter of students are in systems that are only doing remote classes for the first part of year. He said as many as 15% to 30% of students will be choosing to do remote learning in school systems that have that as an option, in addition to in-person classes.

“My request for everybody is for patience. I know people are frustrated. I know people are in many cases scared. … But I promise you, there are thousands of educators who have the best interest of your children at heart. And it will be a struggle and we will get through it,” Mackey said.

Mackey spoke Friday in a press conference with U.S. Sen. Doug Jones that was broadcast on Facebook.

Jones said his office has heard from teachers concerned about safety.

“They are obviously scared. They’ve either got young children themselves or they are in a vulnerable bracket and they are concerned about this virus,” Jones said.

Mackey said the precautions taken by local school systems “will protect them as much as we can” but acknowledged there is risk, just like when someone goes to the grocery store during the pandemic.

“I can’t say that there is 100% certainty that everybody is going to be safe, but we think we can make it safer by imposing as much physical distancing as possible, by asking everyone to wear face coverings,” he said.

He said a statewide mask mandate, if it is extended past July 31, will apply to schools.

Specifics of each program and registration details can be found on the school district websites.

Mackey said about 15 school systems have announced that they will do online classes only for the first nine weeks.

The superintendent said for education quality he believes there is nothing that replaces a highly qualified teacher in the classroom with students, but said “we have to do the best we can” in a difficult situation.

He said the state is trying to address a digital divide by installing more Wi-Fi spots in libraries or on top of school buses.

“Children who have access to high speed internet obviously have a leg up on children who don’t have any access. One of the things we’ve tried to do is create remote access points,” Mackey said.

U.S. Rep. John Lewis, a Pike County native who became a lifelong champion for justice, will lie in rest during a... read more