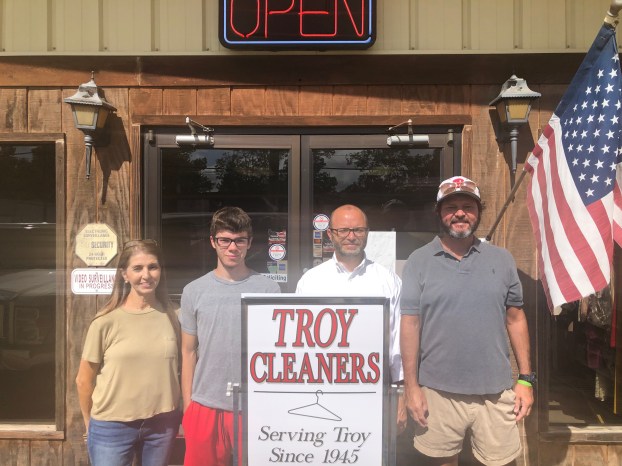 The Price family continues to run Troy Cleaners, which celebrates 75 years in business this year. From left are Dianne Price; grandson Will Price; son and owner Greg Price; and Jamie Price.

This year, the Troy Cleaners is celebrating their 75th anniversary. This dry cleaning business has been operating in Troy since 1945, and was started by Frank and Mary Jeffcoat.

Originally, the Jeffcoats named the business Troy Laundry. Greg Price, a member of the family business today, explained that the Jeffcoats primarily offered services to wash and fold clothes, but they also offered a relatively new cleaning method that was introduced after WWII, which was dry cleaning.

“It’s interesting that they started the business in Troy because most dry cleaning businesses where located in very large cities, but they created a large plant here, which serves as a substantial footprint in southeast Alabama,” Price explained.

The business was an immediate success, and around 1960 the Jeffcoats added a second component to the business called Troy Linen Supply, which provided uniforms to businesses and supplied all kinds of rental linens to restaurants, hospitals, and medical facilities.

The Troy Linen Supply served customers in ten counties including counties in southeast Alabama and in the Florida Panhandle.

“The City of Troy was a big customer, and Troy Linen Supply provided all the uniforms to the city employees,” Price said.

Price was first introduced to this dry cleaning business when his father, Pete Price, started working there in the 70s. “He ran one of the linen routes, and during the summers, I would ride in the delivery vehicle with him and hang out at the plant,” Price said. Growing up, Price helped with the equipment and learned how to work them and repair them.

The original building was located downtown near Synco Drugs and First Baptist Church and was later moved to its current location on South Brundidge Street in 1983 by the second owners Dick and Estelle Busch.

Dick and Estelle were first employees at Troy Laundry, then they became managers, and in the late 70s, they purchased the facility. The Busch couple also decided to change the name to Troy One Hour Cleaners.

“It wasn’t really true that the clothes could be completed in one hour,” Price laughed, “Although the clothes can be processed quickly, getting it done in one hour is practically impossible.”

In the 80s the name was then changed to Troy Cleaners, which remains its name today. Price explained that some customers still refer to the business as Troy One Hour Cleaners and joke about wanting their clothes back in an hour when they drop them off.

Price explained the Mr. and Mrs. Busch grew the business substantially by starting a video rental store called Troy Home Video. “They rented VCRs and movies. It was ahead of its time and was sort of a precursor to Movie Gallery,” Price said.

By this time, Price and his father, who was still working at Troy Cleaners, had started the company Price Enterprises. “My dad wanted to keep working at the cleaners, so we decided to buy it. We kept the name and folded it under the family business of Price Enterprises,” he said.

One thing that has continued to be a core part of the business is family. Since the cleaners first opened, it has been a family-operated business. Now, the Price family has three generations working there.

“My dad passed away five years ago, so my mom, Diane, runs the business and the day-to-day operations. My brother Jamie manages the plant, my oldest son Will just started this summer, and I assist with the operations of Price Enterprises,” he said.

The Troy Cleaners continues to be a full-service dry cleaning and laundry facility that is one of the largest in the area. With the machinery they have at their shop, they are able to process the clothes on site as well as work with other cleaners in the surrounding counties who don’t have the equipment by processing clothes for them.

“It’s interesting to see how times have changed since the business started 75 years ago from the way people dress and the different materials we use to how the business has changed names, locations, and owners,” Price said.

A recent change the business has had to adapt to, like many small businesses, is the corona virus pandemic. While the virus has hindered the Troy Cleaners from celebrating their 75th anniversary the way they wanted, Price is hopeful they will have the opportunity by the fall to have specials and to have photographs for customers to look at the history of the facility and the various people who have worked there.

Secretary of State John H. Merrill has officially extended the opportunity for any qualified voter who is concerned about contracting... read more