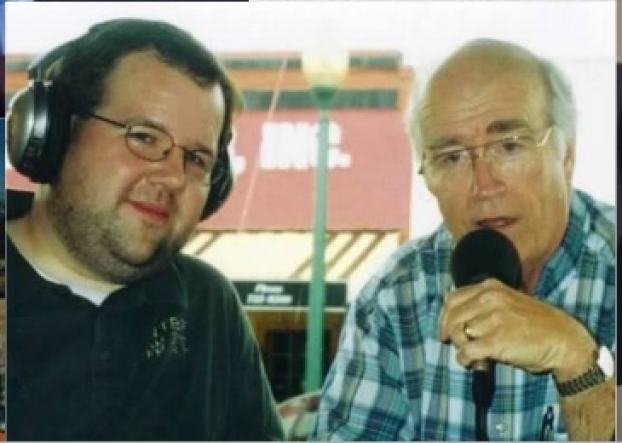 SUBMITTED PHOTO Michael Bird is pictured above with the late Ralph Black. Bird, who shared a first-person reflection on the broadcaster, said Black proved pivotal as the ‘Voice of the Trojans’ for so many decades.

I used to see this guy around Troy when I was a student.  Big fellow.  Moved quickly, though, always in a hurry to get someplace.

At first, I didn’t put the man with the voice.  But one day as he held court in the Troy McDonald’s, I heard the man speak.

Boy, did he have some pipes.

It was Ralph Black, the “Voice of the Trojans” and the founder of the Troy Sports Network.

His exclamation of “Holy Mackerel!” was as much a part of Troy Trojans legend and lore as Jim Fyffe’s “Touchdown Auburn!”

And speaking of Auburn, Ralph Black was a musician’s musician: he’d been in the prestigious group the Auburn Knights in the early 1960s, backing singers such as Toni Tennille before she became famous as half of the Captain and Tennille.  Ralph never missed the Auburn Knights reunions each summer, and he could still play so well!

Before he went to Auburn and studied music, he grew up in Montgomery, Alabama, and was among the first wave of students to attend the brand-new Robert E. Lee High School.  Ralph was the first chair clarinet player in the Lee Band and was an All-State Red Band musician.  He also played lead alto saxophone in the Southernaires, the jazz band at the school.  He graduated from Lee in 1959.

By 1976, Ralph was living in Troy and selling insurance.  He had been a disc jockey in the past (trivia: the first record he played on-air while at Auburn was “A Summer Place” by Percy Faith).  He got into broadcasting again, which is an exciting enough story in itself, but started a radio network with basically a land line telephone and a microphone.  He’d personally call on radio stations and get them online for ball games, and established relationships with the owners and program directors of enough stations that Troy sports were carried on eighteen stations around the Southeast under Ralph’s dedicated leadership.  His tutelage of many others through the years led to a lot of careers in broadcasting for those who worked under the master.

While I was a student at Troy, I got a job I’d always wanted – to be a disc jockey – at WTBF-AM 970 (and later FM 94.7 and 96.3).  We were, and they still are, the flagship station for Troy athletics.  By that, I mean that the programming originates from WTBF’s studios as it is heard across the Southeast on the Troy Sports Network.  It was there that I first encountered Ralph Black, as he was the Voice of the Trojans from 1976-2002.

Ralph was a stern taskmaster when it came to sounding good.  If you made a mistake, brace yourself.  He might come completely unglued and call you every name but your own.  But the thing is, Ralph wanted you to be better.  His philosophy has always been that the listeners are tuning in to hear our best work, not our halfway-done work.  And that guided the man every time he cracked a microphone.  His notes on something as simple as the weather forecast were color-coded and highlighted to the point even a trained dog could sound good reading it on the radio.

When another radio dream came true and I got to work for WACV-AM 1170 in Montgomery in 2006, owner Rick Peters and program director Terry Barber gave me a talk show.  I knew who my first guest should be.

Ralph Black came up and guided me through the program.  He talked about how he kept up with baseball statistics – and he was an encyclopedia about them.  It was fascinating.  And of course, he sounded great, but he kept turning the praise around on me and bragged on me during the show, even though I didn’t deserve it.

Ralph Black passed away on Friday.  After thousands of ball games on the air and who knows how many in person as the voice of the Charles Henderson High School football team, health problems took him at the age of 79.  There will never be another Round Mound of Sound, as he was called, but I sure am glad I got to know him.  Holy mackerel, he was the greatest.