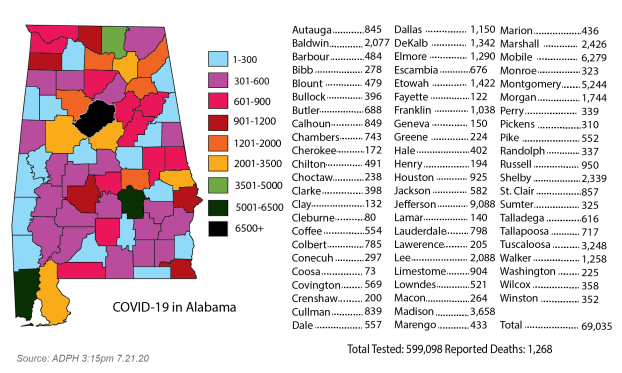 As COVID-19 cases surge toward 70,000 in the state, the importance of testing and timing become even more important, health officials say.

“The numbers are growing, as are inpatient hospitalizations both here and across the state and nation,” Minor said.

As of the 10 a.m. Tuesday update from the Alabama Department of Public Health, Pike County had 552 confirmed cases of COVID-19 with six deaths. The state of Alabama had 69,075 with 1,268 confirmed deaths and 1,563 current hospitalizations, with more than 8,365 since tracking began.

In Pike County, more than 13 percent of all tests administered in the past 14 days have been positive.

That tracks with the hospital is seeing locally, Minor said.

As one of more than half a dozen sites in Pike County offering testing, the hospital relies on screening through the TRMC COVID Hotline (334-670-5409), which is manned 24 hours a day. “We are experiencing a tremendous volume of calls,” Minor said. “And we’re asking for the public’s patience as we work through each caller’s scenario.”

Its goal is to help citizens determine if a COVID-19 test is indicated, and often that determination depends on the individual’s symptoms or known exposure to the virus.

“If they are symptomatic or have a close, known exposure they will certainly qualify for testing,” Minor said.

But the timing of that testing is crucial.

“Timing of testing is very important,” she said. “depending on the date of exposure to a known positive, the caller may be scheduled a few days out to prevent false negative results.”

For example, if someone works in an office with an individual who tests positive for COVID-19, getting tested the same day your learn of your exposure may not provide accurate results. Instead, Minor said the hospital recommends waiting five days to allow for the incubation period and avoid potentially false negative results.

“If an individual is tested too early then they make come back negative and have a false sense of security when in a few days they could become symptomatic and test positive,” she said. “And they would have been contagious the entire time.”

More important, she said, is isolating until able to test or until test results are received, “even if it may be a few days until you can be tested.”

Tests are also being administered for individuals who need clearance to return to work or to travel, she said.

In addition to the testing, Minor reiterated the plea for residents to “mask up.” “We stress the importance of masking up with all public interaction,” she said. “ Remember proper distancing and hand washing guidance as well.”

Leaders throughout Pike County mourned the death of “the boy from Troy” John Lewis, who spent his life battling racial... read more